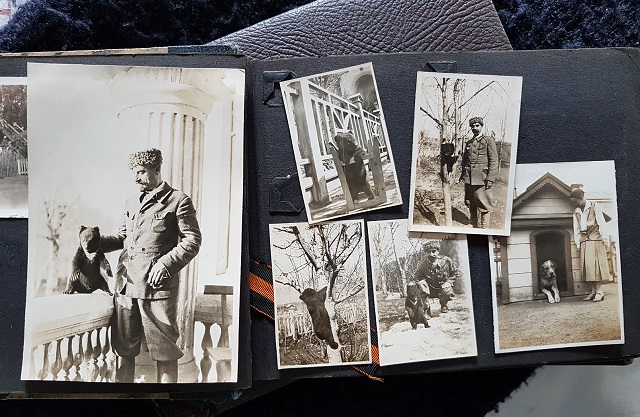 I am guessing that Australians who read this blog post will automatically have a tune going through their heads as they read the title. The theme song from the well-known Australian children’s television program Playschool begins with the lines: “There’s a bear in there… and a chair as well…”. Playschool has been an Australian favourite for a very long time and those lyrics were the first thing I thought of when I found these photos of bears.

I found these photos in an album which used to belong to my Aunt Olga – my maternal grandfather’s niece. I have written about other photos I found in the same album here, and also about Aunt Olga’s father who suffered years in a Russia gulag. I assume these photos – with the bears – were taken in China. It is only guesswork but I believe most of the other photos in the album were from China, so I have put two and two together in the hope of getting four! But perhaps I am wrong and they are Russian bears?

Taking photos of animals seems to run in both sides of my family. My parents took hundreds of photos of their various pets – birds, cats and dogs – but mostly dogs. When I was clearing out their house after my father’s death I threw out garbage bags full of dog photos. But I have to say, these are the first photos I have found of bears!

Now I do know there are awful stories about how bears are treated in various parts of the world, but to me these bears look almost domesticated. From the background in the photos it looks as if the photos were taken on a private property. I have no idea who the people are in the photos – but they are probably either members of the family, or close family friends. I just hope these bears (or is it one bear?) were treated kindly.

Keeping with the theory that these photos are of bears from China, I did find a website which explains that there are three different bear species in Southeast and East Asia – the sloth bear in the Indian subcontinent, the sun bear (also called the Malayan bear) in southern Asia and the moon bear (also called the Asiatic black bear) in Asia. The different bears have different markings but, because these photos are in black and white it is difficult to tell what sort of bears are in them.

According to another website the bear became a totem – an animal with spiritual significance – in China during the Han Dynasty from 206BC to 22AD. They are also important in feng shui terms and represent masculine energies. Unfortunately the bear’s gallbladder and bile were valued in Chinese medicine which led to the horrific treatment and deaths of bears. I hope the bears in these photos escaped any sort of similar fate.

As I sort through family photos, with a view to keeping only those which are significant, I doubt these will make the cut. But they were fun to find!

The Sins of the Fathers