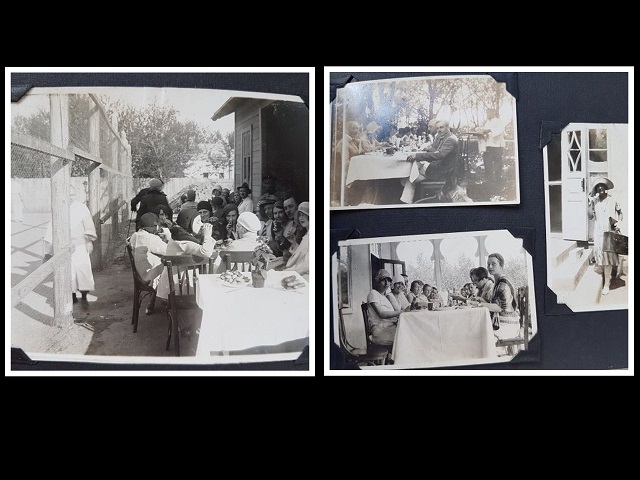 I find it very frustrating when I look through old family photos and I have no idea who the subjects are. To add to my frustration, I also often have no idea where or when the photos were taken. Even a certain amount of detective work fails to satisfy my curiousity.

The photos above are an example. Thanks to a friend of mine (you know who you are Becky!) who looked after my Aunt Olga and Uncle Nick, I own two photo albums with photographs from the Woronoff side of the family – or at least from my grandfather’s sister, my great Aunt Natasha. So, the photos could be of the Woronoff family, or the Shulkevitch family. Or they could be of random friends!

One thing I can be grateful for, is that whoever took the photos in the albums took hardly any casual scenery photos – meaning I have less to throw out. You know the ones – those holiday snaps of beaches and mountains and roads to nowhere with not a single family member in them. My parents filled photo albums with those type of photos, as well as photos of houses, dogs and cars. Needless to say, I am not planning on keeping any of them.

But back to trying to solve the mystery of who, when and where.

I am going to guess that these photos were taken in China. When my great-Aunt Natasha and her husband escaped the Russian Revolution, they made their home in Harbin, China – as did many other White Russians. In the end their choice of location was perhaps not the best – for a better understanding you can read my previous posts about them here and here. However, it is likely there were few options at the time.

If you look closely at the photographs, it appears that the servants are Chinese. In the photo on the left, the women are wearing jackets and, in some cases scarves, which leads me to believe that, despite the sunlight, it was not a very warm day. Judging by both the timing of the Russian Revolution and the cloche hats worn by many of the women, I will guess again that the photo was taken sometime in the 1920s.

All three photos show people enjoying meals outside – most likely lunches as the light looks to be reasonable, although afternoon tea is also an option.

I do not recognise a single person in these photographs. This leaves me with another problem. Do I throw these photos out or do I hope that one day the mystery might be solved for me and I will discover who these people are? I know that when I disappear from this earth, the photos will not be kept. Would it be easier to get rid of them now? Part of me wants to find out the story behind the photos and how – or if – it fits into any of our family history stories. Part of me is ready to acknowledge that it is a mystery which will never be solved.

You Are a Story

The Tsar and the Imperial Family attended their wedding