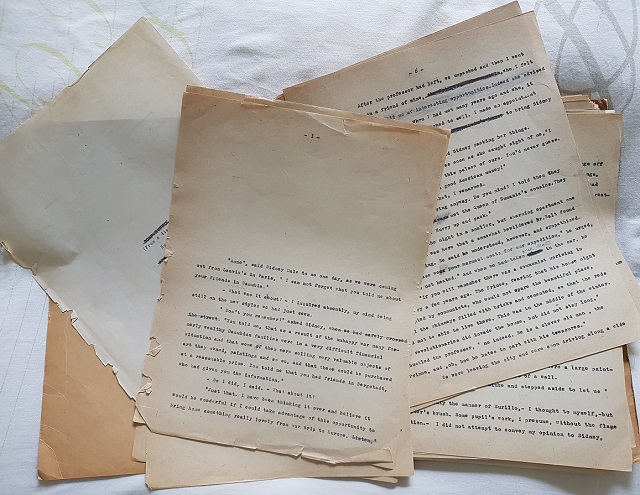 I guess there are many family historians who find strange photographs or documents in the papers they have inherited. I definitely have many photographs which have no details recorded on them and I cannot place, such as the photos in this post from last week. But, amongst the many paper records of my family history, I have also found things I cannot explain. This manuscript is an example.

The manuscript is a short story. It is typed over thirty nine pages, forty if you include the title page. Someone has gone through and edited it, adding or changing words and sentences, or crossing out whole sections of text. The title page reads:

Soap-Bubble (which has been crossed out)

Olga H (which has been crossed out)

In the bottom right hand corner of the title page is my grandmother’s name and address in Pennsylvania.

I have to admit the surname of Olga “H” is typed out; however I am reluctant to share it on social media until I try to discover who it was. I have done a quick Google and there are a few possibilities – all of whom have living relatives.

The manuscript lies in a brown folder. In the top right hand corner, written in pencil, is a query of which I can only make out a few words, “Olga – Did she bring in? a friend of…. please… B.” The dots indicate words I cannot decipher.

The story is about two women, one of whom is a wealthy American and the other the narrator. The story begins in Paris where the husband of the wealthy American is about to leave Europe and go home, but his wife would like to stay on to buy artwork, that she has heard previously wealthy families from an imaginary war torn country, somewhere in Europe, were selling to get themselves out of financial difficulties. The wealthy American is after no less than a Rembrandt or a Velasquez! Along their journey to discover the perfect painting, the two women meet many characters, some of whom are definitely crooks!

I wonder if this story was based on the many wealthy Russians who fled to France and other western countries after the Russian Revolution and who ended up having to sell the few valuable possessions they had managed to take with them? Or perhaps it was about the previously wealthy European families in general who found themselves impoverished after war, but still in possession of homes which needed renovations and antiques to sell? Who’s diary was the story taken from? And I wonder why the story was titled Soap-Bubble?

But most of all I wonder who Olga H was? And why her manuscript was among my grandmother’s papers with my grandmother’s name and address on it. Was my grandmother writing under a pseudonym? Was Olga H a friend of hers? One day perhaps I will attempt to find some answers to these questions.

Family history mysteries – Who is in the photographs?