The private letters from the Empress frequently inform us about history

I have often written about letters and my passion for reading other people’s thoughts and descriptions of their lives. I have already written a post on one of the letters written by Empress Alexandra of Russia to her husband, Tsar Nicholas II. It was taken from the book Letters of the Tsaritsa to the Tsar 1914-1916, with an introduction by Sir Bernard Pares, K.B.E. Which is where I found the letter I am writing about today.

August 1915 and with World War I raging in Europe, the Russians were suffering huge losses and being forced to retreat.

On 22 August 1915, Empress Alexandra wrote to her husband from Tsarskoye Selo. A prolific letter writer, she numbered all of her letters; this one was No. 98. Although not her longest letter, it covers almost three typed pages of smallish font. It begins:

My very own beloved One,

I cannot find words to express all I want to – my heart is far too full. I only long to hold you tight in my arms & whisper words of intense love, courage, strength & endless blessings. More than hard to let you go alone, so completely alone – but God is very near to you, more than ever. You have fought this great fight for your country & throne – alone & with bravery & decision. Never have they seen such firmness in you before & it cannot remain without good fruit.

Do not fear for what remains behind – one must be severe & stop all at once. Lovy, I am here, don’t laugh at silly old wify, but she has “trousers” on unseen…

Throughout much of the next couple of paragraphs, Alexandra continues to entreat Nicholas to fight – for right, for Autocracy and against evil. She calls on Nicholas to lean on his faith and states, Our Friend’s prayers arise night & day for you to Heaven & God will hear them. Of course here she must be writing about Rasputin.

In the middle of the letter Alexandra begins to give advice; I do hope Goremykin will agree to yr. choice of Khvostov – you need an energetic minister of the interior – should he be the wrong man, he can later be changed – no harm in that, at such times… And: Only get Nikolasha’s nomination quicker done – no dawdling, its bad for the cause…The left are furious because all slips through their hands & their cards are clear to us & the game they wished to use Nikolasha for – even Shvedov knows it fr. there. 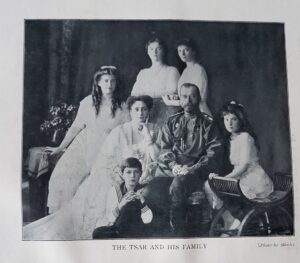 Further along she writes about her health, begging Nicholas not to worry if he hears she is not so well. She tells him to go straight to bed without tea as he needs his rest.

Alexandra ends her letter lovingly – I clasp you tenderly to my heart, kiss and caress you without end – want to show you all the intense love I have for you, warm, cheer, console, strengthen you & and make you sure of yourself. Sleep well my Sunshine, Russia’s Saviour. Remember last night, how tenderly we clung to-gether. I shall yearn for yr. caresses – I never can have enough of them…

Whether or not Nicholas took her advice and, no matter what else might be thought of Alexandra, her letters certainly show how much she loved her husband.