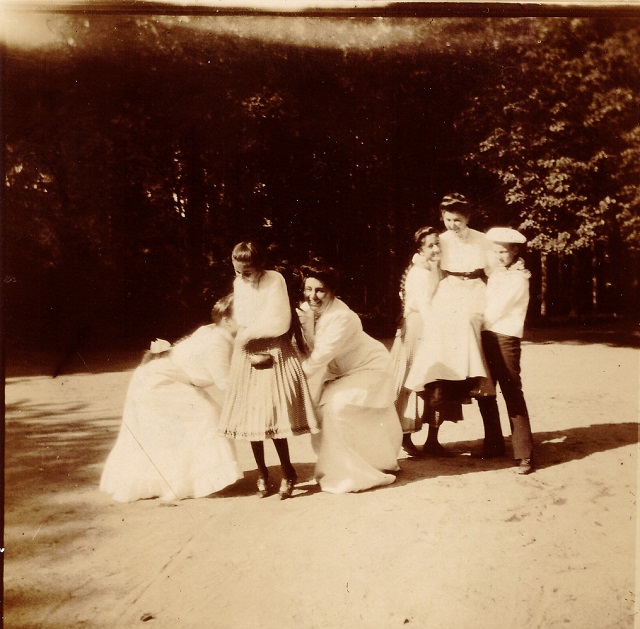 Above is a photo, taken at Ivnia, of my maternal great-grandmother, Countess Catherine Nicholaievna Kleinmichel, her daughters and Grand Duke Dmitri Pavlovich – according to the writing on the back of the photo. I believe my grandmother, Olga Voronov (Woronoff) née Kleinmichel, is second from the left, next to her mother. On the far right is the Grand Duke. I am not sure which sister is which, but it is possible my great-aunt Tata is to the right of her mother at least, if I compare other photos of Tata, it looks like her.

It seems as if they are having a lot of fun with their smiling faces, although the Grand Duke has a rather more serious expression. It looks as if they are setting up for one of those old fashioned races where two people run while carrying a third – were they called chair races?

Grand Duke Dmitri Pavlovich Romanov was the only son of Grand Duke Paul Alexandrovich (the youngest child of Tsar Alexander II) and Princess Alexandra of Greece. He and his sister Grand Duchess Marie Pavlovna were brought up by their uncle Grand Duke Serge and his wife the Grand Duchess Elizabeth, after their mother died and their father became romantically involved with a commoner and divorcee, who he later married. This marriage saw the Tsar exile Grand Duke Paul Alexandrovich to Paris. The Grand Duke Dmitri Pavlovich and his sister became playmates with my grandmother and her sisters. This is what she wrote in Upheaval:

“We were such a big and united family of children that we had not many playmates outside; indeed we preferred to play by ourselves. One winter in Moscow, however, we met the Grand Duchess Marie and her brother, the Grand Duke Dmitri. They were near the ages of Tata and Ella, and a great friendship soon sprang up between us. At that time they were living with their uncle, the Grand Duke Serge, and his wife, the Grand Duchess Elizabeth.

We children began seeing one another by taking dancing lessons together; but these were soon interrupted by the tragic death of the Grand Duke Serge, when a bomb was thrown at his carriage as he was driving through the Kremlin. The Grand Duke was literally torn to pieces, some of which were said to have been found on the roof of a four story house nearby. His coachman also was killed, and an old woman who was passing by was wounded.”

My grandmother then writes about the death of Grand Duke Serge in 1905 and later she mentions the following:

“The summer following the Grand Duke Serge’s and my grandmother’s deaths, Tata, Ella and I spent with our friends the Grand Duchess Marie and her brother at the Grand Duke’s estate near Moscow.”

Later in life Grand Duke Dmitri became infamous for his part in the murder of Rasputin. But he was also apparently known for his humour and witty letters, one of which can be found here.

Tell Me a Story

What is flourishing in your life?