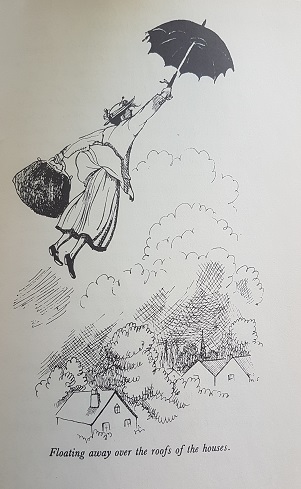 Yesterday I saw “Mary Poppins Returns” with a friend of mine. It was a welcome break from writing about my father and the traumas he and his family went through. I had just finished the chapter where his brother is killed in action during WWII and was beginning the one where my father starts his days as a soldier in the German army.

I enjoyed the movie, even though it was slightly strange to see the grown-up Michael and Jane Banks, they weren’t quite what I had anticipated. But I liked the movie because it reminded me of my childhood. I also liked the animation that was incorporated, much like the original movie, and the storyline did feel like a Mary Poppins book, albeit set twenty-five years later than the original and with different children. I’m not sure I was ready for either of the Banks children to be parents. I believe the screenplay is based on the sequels written by PL Travers, so there was definitely some of the previous magic.

But there is nothing quite like the feeling of reliving your childhood – or at least revisiting your favourite stories. And “Mary Poppins” was certainly one of my favourites. I own a hard copy version of the book and the illustrations are fantastic. I just picked it up again and flicked through it. I didn’t even have to read the words, the illustrations jogged my memory and transported me back to the days I spent in bed reading. I remember that, once I started reading “Mary Poppins”, I couldn’t put it down. To me, that is the sign of a good book.

Who didn’t want a Mary Poppins in their life? She was someone who could turn the dullest, greyest moments into the most colourful adventures. Inanimate objects spoke, beds made themselves, clothes put themselves away, medicines were tasty and a walk to the park turned into anything but boring. Days spent with Mary Poppins always had a sense of wonderment and surprise to them. One never knew what escapades Michael and Jane would be thrown into next. And I, as the reader, was always right there next to them.

I had read the book many times before I saw the first movie. I was captivated from the beginning, not least because the songs were so catchy. Although I enjoyed the music in “Mary Poppins Returns”, there is nothing quite like “Let’s Go Fly a Kite” or “Supercalifragilisticexpialidocious” for getting the feet tapping. In fact, after leaving the cinema, I sang “Let’s Go Fly a Kite” all the way home. Luckily for those on the road around me, I was alone in my car with the windows up.

If you are debating whether to see “Mary Poppins Returns”, I would recommend you do. But remember to take your inner child with you. I believe it is a movie adults will enjoy more than children, but it will help if you know and love the original. Despite the twenty-five-year gap between the two movies, Mary Poppins is still practically perfect in every way!