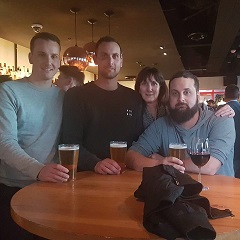 Nowadays it isn’t often I get to spend time with all my three sons, together at the same place. Especially as my middle son lives in Western Australia and my eldest son is over an hour’s drive away in Gippsland. However, this weekend saw middle son fly to Melbourne to play football with his brothers. It was only the second time, in their senior football careers, they have all played together in the same game, for the same club. Of course, I went to watch! I have always loved watching them play football, since they began with Auskick so many years ago.

On the Friday night before the game and after I finished work, we went out for a few drinks in the city before they went to watch the Richmond / North Melbourne game at the MCG. I really enjoy the company of my boys, whenever I get to see them which seems to be less the older they get. Although I’d love to see more of them, I think its wonderful they have full lives which keep them busy. We can always communicate via Facebook or phone messages and they mostly reply to me within a reasonable time frame. Sometimes I have to prompt them!

After the game on Saturday, which they lost by two points – but I won’t go into that – we went out for dinner. We were celebrating middle son’s birthday, a few days early because he flies back to WA on Monday. We went to a pub close to my youngest son’s home where we ate and drank and talked.

The time I’ve spent with my boys this weekend made me think of the lack of time I spent with my parents. I can’t remember ever, as a young adult, when I would have willingly gone out for drinks or dinner with them. We simply had very little in common. Neither did they ever invite me out once I moved from home and began my adult life. I used to go back home for dinner now and then, but we had little to talk about once we had asked what each other had been doing. When my parents were bringing me up there was no question about them ever being my friend. It was never going to happen. When I brought my boys up I hoped I could be their friend as well as their mother and it seems to have come to fruition. The boys and I can converse on a myriad of subjects. We don’t always agree and that is the way it should be. They ask me for advice and I return the favour. Of course, as their mother, I’m not privy their private lives just as they aren’t privy to mine. That would be way too uncomfortable!

I look forward to the next time we all get together. I can’t predict the future, but I guess I might have to wait for my eldest son’s wedding next March. Until then, I’ve got the memories of this weekend to hold onto.

Tracing Threads of the Past – Live art performances

Russian Christmas memories; the Nutcracker and the Mouse King