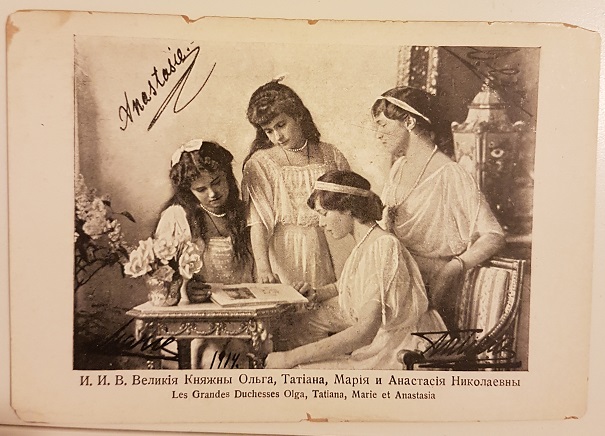 Among other interesting objects left by my parents, I inherited many Russian postcards. I assume they belonged to my maternal grandparents, Paul and Olga Woronoff. There are a couple of hundred of them and I know almost nothing about them. There are postcards depicting Tsar Nicholas I, his wife the Empress Alexandra and their five children; Olga, Tatiana, Maria, Anastasia and Alexei, in all combinations. Many of them are of the four daughters, also known as OTMA, an acronym taken from the first letters of their first names.

This particular image of the Grand Duchesses Olga, Tatiana, Maria and Anastasia, looks very posed. The girls, all quite beautiful, are almost evenly spaced from one side of the image to the other, all gazing at the same document on the table in front of them. I cannot make out what the document is. It almost looks as if it could be the cover of a book. The furniture also looks posed. The table and chair positioned to balance the image, flowers at one side, what could be a painting on the other. The postcard is darker in the bottom left hand and top right hand corners, giving the viewer a good sense of contrast, as well as balance.

It is a black and white image, so I can only imagine the girls were all wearing white. Each of them wears a simple necklace. The older two, Olga and Tatiana, have shorter hairstyles and wear headbands. The younger two, Maria and Anastasia, have bows in their long hair. In each corner of the postcard one of them has signed her name. Four corners and four signatures.

There is no date on the postcard. I don’t know when the image was taken. I found a similar image on eBay which indicated it had been taken around 1910. The writing underneath is both in Russian and French. The back of the postcard has a dividing vertical line and the words “Carte postale” – “postcard” in French. Of course, the postcard might have been manufactured in France, but French was also widely spoken within the Russian aristocracy. It was considered a language of culture.

In 1910 Olga would have been 15 years old, Tatiana 13, Maria 11 and Anastasia 9. To me, the girls look older than that in this image. Perhaps they were dressed to look older. Perhaps they were simply more mature than modern children. I assume that, as the daughters of the Tsar, they would have had to grow up faster than your normal child.

Considering the age of the postcard and the travels it has been on, it is in reasonably good condition. A bit frayed and brown along the edges, a couple of corners missing, but still not too bad. I would love to know more about its origin and history. Was it, as I believe, a posed image destined for mass produced postcards? How many were produced and distributed? I wonder if I will ever find out.

She won third prize in a nationwide contest