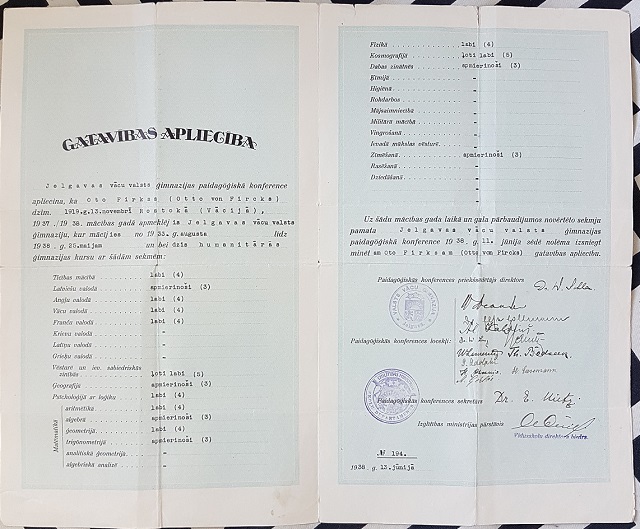 If I were ever granted three wishes, my first would be to understand every language in the world because I would then be able to comprehend all of the family history documents I have inherited. Not that I would need to know more than German, Russian, French and Latvian, but you never know when understanding a language might be handy.

I have written about the importance of studying and knowing more than one language before. Although my parents were both multi-lingual, they only spoke to me in English, a fact I have long considered a handicap. I tried to learn both French and German in high school, sadly I did not excel. I have continued my German studies and am now also learning Russian, but I know I will never have the fluency I crave in either language.

From 1933 to 1938 my father, who I have written about here, attended the Jelgava German State Gymnasium in Latvia – the equivalent of our high school. (My father knew Jelgava as Mitau – his family relocated there in the mid 1920s). He studied Latvian, English, German and French, doing reasonably well in the last three. It looks as if the school also offered Russian, Latin and Greek, subjects for which he was not awarded a mark, so presumably he did not study them. This seems slightly odd to me as by the late 1930s studying the Russian language was essential for all students in Latvian schools. My father once told me he had learned Russian but, by the time he met my mother, had forgotten most of it. Perhaps he learned it during his early school years, rather than in high school.

The subject for which my father received the highest mark on his certificate was Cosmography. I had never heard of it and had to look up the definition. Cosmography is, according to dictionary.com, “a science that describes and maps the main features of the heavens and the earth, including astronomy, geography and geology.” Bearing in mind that description, it seems strange then that my father received one of his lowest marks for Geography! In an article written in England in 1937, I learnt “Though Geography is often regarded as a modern subject, it will be seen… that, even in classical and medieval times, the principles of the subject were taught, though often under other names. Thus Geometry and Astronomy gave way to Cosmography, which in turn, gave way to Geography.”[1] Interesting.

I cannot remember my father being interested in the either geography or astronomy, he was certainly no star gazer, however his study of languages proved useful after World War II when he was able to find some work in Germany as a translator. It was one of the many jobs he turned his hand to at a time when everyone did whatever they could to survive.

No Delay – Met in October and Married in January