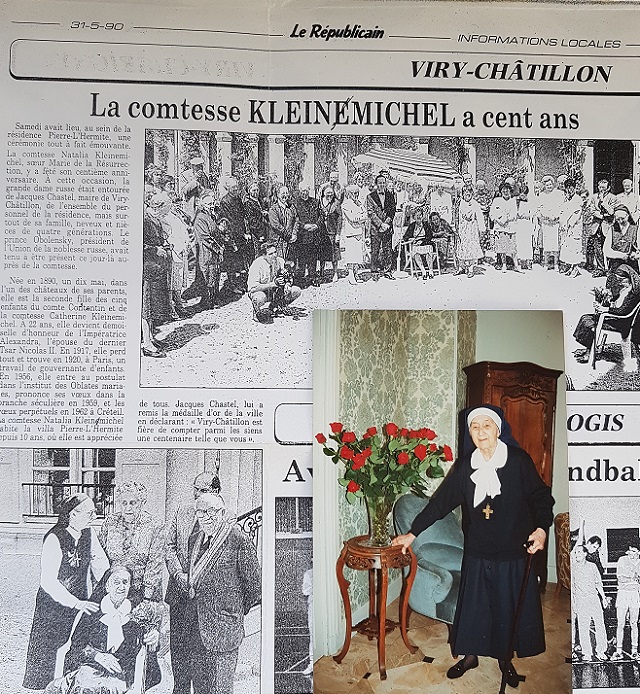 On 10 May 1990 my great Aunt Tata celebrated her 100th birthday. Beginning life as Countess Natalia Kleinmichel, older sister of my grandmother Countess Olga Kleinmichel, Aunt Tata saw in her birthday as Sister Mary of the Resurrection. The celebrations were recorded in this newspaper article from France, seen above with a photo of great Aunt Tata at 100 years old. From countess to nun, she certainly had a remarkable life.

In her book, Upheaval, my grandmother describes her sister:

“In our games Tata was always the leader. Her fertile imagination had forever something new in store for us. Taking advantage of the interest and new ideas she brought into our games, Tata invariably took the most enviable and preeminent part in them.

If there was to be a queen in the game – Tata was the queen. If a witch was supposed to live in the woods catching children for her meals – she was the witch and we two younger sisters were the children. She was an autocrat in our little world, and it seemed so natural that it should be so, that we did not demur.

One day Tata conceived the unfortunate idea of playing at being Christian martyrs. Of course, we were the martyrs and she – the executioner. She flogged us with a skipping rope inflicting on us quite bad bruises.

The important part of this game was to stand this without any outward sign of suffering, and I must admit with a certain amount of pride that not a single sound escaped our lips, though Tata was very thorough in her methods.

That night the traces of our tortures, numerous red and swollen stripes across our backs, appeared to the horrified gaze of our maid. She reported to “Higher Quarters” and the game of martyrs was forever banished from our repertoire.”

Tata escaped Russia with my grandparents. Before they left Tata had a few narrow escapes from the Bolsheviks before she finally joined my grandparents in a small town near Kharkoff (now Kharkiv in the Ukraine). Together they were eventually able to find a passage on a British ship out of Novorossiysk and they made their way to Constantinople and then on to France. In France Tata was the first to find work as a children’s governess and it was through her that my grandparents found jobs at a hotel in the south of France. I seem to remember hearing that Tata’s employers did not treat her very well, but I have yet to find written evidence of that.

Tata stayed in France when my grandparents migrated to America and it appears that in 1956 she entered the Catholic church, at Créteil, with the purpose of becoming a nun. It seems strange to me that she renounced her Russian Orthodox faith, as her family were very devout and the Orthodox and Catholics have different views in a number of theological areas. I often wonder what my grandmother thought of Tata’s decision to change religions.