Either late on the night of 16 July, or early in the morning of 17 July 1918, Tsar Nicholas II, his wife the Empress Alexandra, their four daughters; Olga, Tatiana, Marie and Anastasia, and the heir to the throne, Tsarevich Alexei, were ordered to dress and go down to the cellar of the Ipatiev House, where they had been held prisoner by the Bolsheviks. They were joined by the four servants who were still with them. In the cellar, the family and servants were arranged in two rows, almost as if they were to be photographed. Instead, armed men entered the cellar and shot at them. Those who were not killed were stabbed to death. In two days’ time it will be the 100-year anniversary of their execution. 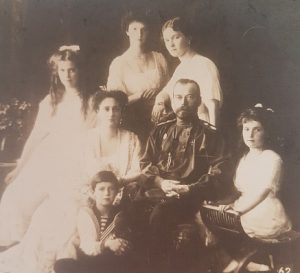 There is a plethora of information about the Romanov family (pictured above) and their execution on the internet and in books, so here are my grandmother’s words, from Upheaval, the book she wrote after escaping the Russian Revolution with her husband and eventually finding safety in America.

The dignity, the Christian humility and the deep faith with which all the members of the Imperial family bore their crosses had impressed every soul near them. After the first midnight Easter service, following the arrest in Tsarskoe Selo, the Emperor gave the kisses of brotherhood to all the men present, including his jailers, causing them an emotion they were unable to hide. In Tobolsk the guards tried to show the family their sympathy and respect in many ways; they brought flowers to the young girls and played games with the Tsarevitch. As soon as this friendliness of attitude was noticed by the Bolshevik chiefs, however, these guards were replaced by others – but these in their turn were changed from insulting brutes into respectful and devoted men.

Each day of captivity, alas, brought new restrictions and severities upon the unhappy family. After their removal to Ekaterinburg the vilest kind of men were assigned to them as jailers. The doors leading to their rooms were taken off the hinges so that the prisoners could be watched incessantly, day and night; they were forbidden to go near the windows, and, later, the window-panes were covered with paint, so that they were deprived even of the sunlight.

Two days before the murder of the Imperial family, and after a long period during which they had been deprived of such consolation, a priest was allowed to hold a service for them in their prison. He told later how deeply he had been impressed by the spiritual height the family had reached. He said that he felt they already did not belong to this world.

It is upon the image of those, whom I have lost in those tragic years and who have shown me how to live, suffer and die with unwavering faith in God, courage and forgiveness, that my thoughts are dwelling as I close my story.”