With the 100th anniversary of the death of the Romanovs approaching next month, my thoughts have been more and more on the Russian side of my family; my mother’s family. My grandmother’s family were Russian aristocrats. As a young lady, she became a Maid of Honour to the Empress Alexandra and often had the privilege of being invited to take tea at Tsarskoe Selo, spending the afternoon with the young Grand Duchesses.

My grandmother, Olga Woronoff, was the youngest child of Count Constantin Kleinmichel, godson of Tsar Nicholas I of Russia. In the photograph below, taken from her book Upheaval, she is seen with her father. 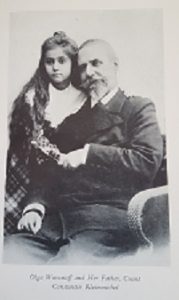 Although my grandmother told me many stories about her younger days, I remember almost none of them. I have a shocking memory and must rely on the book she wrote, which was published in USA in 1932. In it she describes her childhood, growing up with her sisters Clair, Tata and Ella and her brother Dima, on their country estates in Potchep and Ivnia and their town house in Moscow. Later, she gives her account of her marriage to Paul Woronoff, an officer on the Tsar’s yacht The Standart, of life during the Revolution, and the difficult times they lived through.

One of my favourite stories, and one I could readily relate to, told of her love of reading. This passage from her book might explain where my love of books comes from:

My greatest ambition as a child was to learn how to read. Having reached the age of three, I started to beg everyone I could get hold of to teach me, but my parents had strictly forbidden this to be done, so that all my attempts were thwarted. It was thought at the time that a child’s mind should not be developed too early.

Little by little, though, with ruse and perseverance, and letter by letter, I picked up all the alphabet and by four years of age could read in Russian and knew most of the Latin letters.

I then began to read everything I could lay my hands upon, so that our governesses, in whose charge we were in the daytime, hid all books away from me on the top of the bookcases, where I could not reach them. Thus, I was often left to stand with hands clasped behind my back, face upturned, gazing wistfully at the spot where the object of my dreams had disappeared.

Apparently, her brother Dima also loved books. He was an inveterate reader and would much rather stay at home buried in a book than go out to play with his friends. I wish I had known him.

Luckily, when I was growing up, books were never hidden away, and I often spent all day in my bedroom reading. Even now I devour books whenever I can. Public transport to work and back gives me a couple of hours a day to read and I still enjoy reading in bed at night.

I wonder if the love of reading is inherited or learnt?