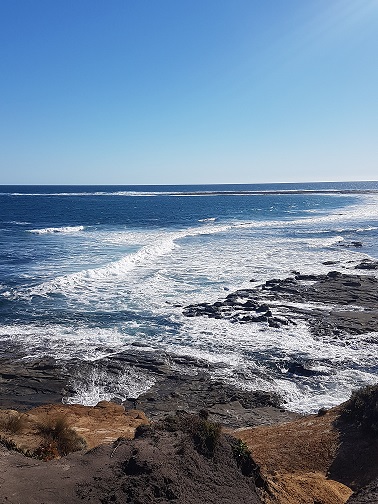 “We are tied to the ocean. And when we go back to the sea… whether it is to sail or to watch – we are going back from whence we came.” John F Kennedy

The ocean has played a part in the lives of both sides of my family. In the thirteenth century my father’s ancestors crossed the seas leaving the shores of Northern Germany behind for the Baltic States. At least I like to think they sailed to their new land, in the same way my father and his family returned from Germany to Latvia after the Latvian War of Independence.

Although I have no proof, it is rumoured my mother’s ancestors travelled across the waves and left Sweden for Russia’s vast land.

My maternal grandfather was in the Russian Navy where he served Tsar Nicholas II on his yacht, The Standart. In December 1908 he was one of the sailors who helped the people of Messina, after the earthquake which destroyed the city. I have written about my grandfather before, in this post.

My maternal grandparents escaped from the Russian Revolution in the bowels of a English steamer “Hanover”, which was taking refugees to Constantinople. In the book she wrote, my grandmother says, “We stayed on the deck until the Russian coast had been replaced on the horizon by an endlessness of tossing gray water.” I can only imagine it was a terrible journey for them. From Constantinople they, like many other Russian refugees, made their way to France, where my mother was born. She was three when they once again crossed an ocean to start a new life in America.

After WW2 my father boarded the Queen Elizabeth in Cherbourg, France and traversed the Atlantic Ocean to join his then fiancée in New York. Once they met, he broke off the engagement. Not long afterwards he met my mother.

One day my father was sitting in his office which overlooked the harbour. He saw the ships with the water lapping at their bows. He handed in his resignation that day and took off to travel around America. He later told me he couldn’t bear to watch the ships departing without him.

Almost twenty years after that, when I was ten years old, my parents decided to migrate to Australia. They had the choice to make the journey by air or sea and my father chose the ocean. We boarded the P&O Orsova in San Francisco and made our way via Vancouver, Hawaii, Fiji and Auckland to Sydney.

I loved every minute of being at sea. I loved the swell of the ocean and the gentle rocking of my bunk as I fell asleep. I spent much of our voyage standing at the bow of the ship watching the waters split before us. I loved the rougher days, when the waves hit the ship and the spray would cover me. I couldn’t breathe enough of the salty air. I felt alive.

When I am sad or stressed or lonely, I go to the beach and look out over the ocean. Almost immediately I am at peace.