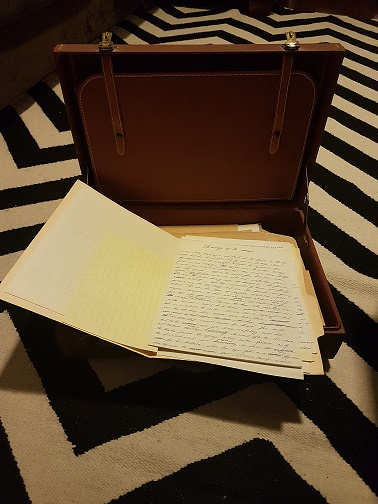 I had a magical moment last night. I was looking for some of my parents’ documents and letters which I had put away, but I found so much more.

Most of the paperwork I had shipped over to Melbourne after my father’s death is kept in tubs in the spare bedroom’s wardrobe. Next to the tubs, and also filled with paperwork, stand my father’s two briefcases, one brown leather and one black.

While he was alive those two briefcases contained every document and letter my father held sacred. The black briefcase contained his will, bank books, birth certificates and the deed to the house. The brown briefcase had my maternal grandparents’ documents, tax related information and odds and ends. Two months after his death I had cleared out his house, packed the documents away in boxes and filled the briefcases with papers I couldn’t fit anywhere else.

I have opened both briefcases several times, looking for this and that but I’ve often skimmed over what I found rather than reading everything in depth.

Last night I went through everything I found in the brown briefcase and I discovered something I had not known before. My father was a writer.

I’m used to having writers in the family. My mother wrote two textbooks on her specialty – the history of costume. She was also a successful commercial artist and lectured at TAFE. My grandmother had one book published and I’ve found the draft of a second. But I never knew that my father also had the writing bug.

Most of my father’s stories are untitled and unfinished but one is called “The Wedding of the Dwarfs” and I think he finished it but I have to try to read his atrocious handwriting to find out. Two and a half pages are typed, most likely my mother transcribed them, and there are another nine handwritten pages, with crossings out and notations.

The story starts like this, “It was a clear, cold, winter night and almost all lights in the castle had been turned off. The big massive building stood clearly out in the moonlight and gave the impression of firmness and solidity. If you knew the castle’s history or not, you would never have doubted that this stone building was very old. There was only some light on the second floor, that is candlelight with its calm and comforting glow. It was the Countess’s private drawing room, her favourite retreat. And there, surrounded by books and family portraits, was the old lady bent over her favourite oak spinning wheel. This was the hour she liked so much, the time when everyone had gone to bed and she would noiselessly sit and spin that soft, soft wool which she would later use to make warm stockings and sweaters for the many poor children and adults who lived nearby. This was the hour when everything was quiet and there was not a sound inside or outside the castle.”

One day I will attempt to decipher the rest of the story. Although dwarfs are not my thing, maybe I will try to give it a polish and see what happens.

My Grandparents in France – celebrating Christmas in exile