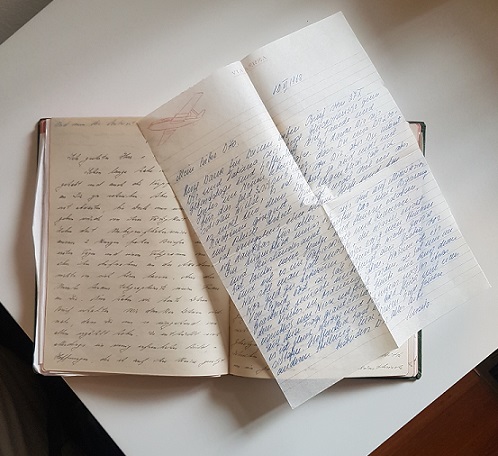 When I closed the door for the last time to my father’s house, I took with me boxes of documents, certificates, letters and bits of paper with scribbles on them. Most of these were either in German or Russian. I can order a coffee in German. I can count to ten in Russian. You can, perhaps, understand what a Herculean task of translating I have in front of me.

Languages and writers also have nuances. And idioms. And slang. For example, in German, “Da steppt der Bär!” literally means “the bear dances there” but what it really means is, “It will be a good party.” If you didn’t know that, you might think the writer was talking about a real bear at a party!

I mainly use Google translate, which is decidedly not foolproof. I spend hours typing passages into the computer and then copying the translation into another document. But it doesn’t recognise all of the nuances or idioms which may be woven through the vast number of letters and scribblings I’m trying to translate. Next to the computer I always have a huge German dictionary. Every time something doesn’t sound like it should on Google, I wade through the dictionary. It is a slow process.

What makes the process even slower is trying to decipher various forms of handwriting. With this post there’s a photo of a couple of items I have first to decipher and then to translate. Almost all the pages of the book are written in pencil. If I had the finances, I would hire a translator to sift through the tubs of letters and documents stored in the spare bedroom.

In the past, I have used a professional translator and the results were amazing. I have a pile of letters, all in German, which had been written to my father by a young girl, after the end of World War II. They were both living in Germany at the time. My father once told me the letters were so beautiful, he could not bear to part with them. My first attempts to translate them were a dismal failure.

The professional translator spent several weeks working on them, which is not surprising. She emailed me the full translation, together with comments and notes and other attachments so that I could fully understand what had been written. She made me aware of the culture of the time and the writers who had influence at the time. The effort she put in, not only to translate, but also to ensure I could appreciate the context of what had been written, was something I was very grateful for.

It might be many years before I can finish translating every document I have. Even thought I’m learning German, it won’t be easy. And then there’s Russian. It feels as if there is a lifetime of words, languages and translation ahead of me. And that’s not a bad thing.