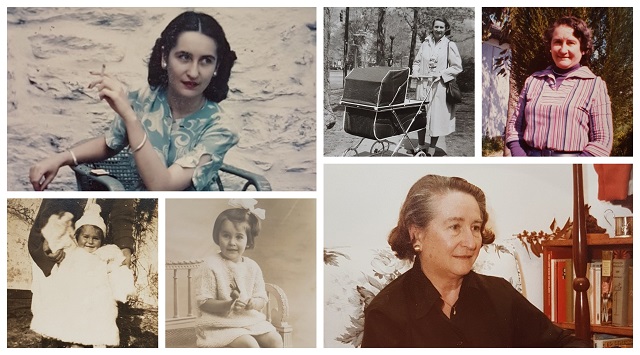 My mother – she had many names over the years, and she grew into each of them elegantly and with style.

Born Tatiana Pavlovna Woronoff on 9 November 1922 in Nice, France to Olga and Paul Woronoff, refugees from Russia, my mother was to live in various parts of France until 16 June 1928 when the family immigrated to America aboard the SS Suffren.

They began their new life in Pennsylvania and, by the time my mother was in high school at Radnor High in Wayne, Pennsylvania, her friends had shortened her name to Tot. She graduated from high school and studied fashion at Moore College of the Arts in Philadelphia, later working in fashion and costume design in New York. Eventually she freelanced as an artist, selling many of her designs to greeting card companies. I can still remember her drawing those greeting card pictures on her easel, while I sat on a stool next to her.

It was in New York on 29 October 1950 that my mother met my father. The next January they were married, but it was to take another nine years before I was born. My mother told me she had suffered several miscarriages before I appeared. I know she had a difficult birth, over forty hours in labour, and finally a Caesarean birth. The doctor even came out of the labour ward to ask my father which of us he wanted to save, if it came to that. Years after her death he told me he had chosen her – a perfectly understandable choice. I just wish he had let her know.

After their marriage, my parents travelled to the mid-West, in due course making a home in Colorado. But New York called them back and that is where I was born and where we lived, in several different places, until 1970.

In 1969 my grandfather died of stomach cancer and my mother, who had always been close to her father, suffered greatly at his death. She became the sole carer of my grandmother who, with the death of her husband, had lost the will to live and gradually declined into dementia.

In 1970 we immigrated to Australia where my mother began yet another career, leading the Design Theatrical Arts course at Perth Technical College. She also became very involved with the WA Historical Society and with the Russian Orthodox Church, serving on the ladies committee and volunteering for those in need.

After she retired, my mother began to fade. She had always enjoyed her work and the camaraderie of her peers. As the years went by she lost her memory and was eventually diagnosed with Alzheimer’s.  Like her mother before her, she died in a local nursing home. It was 31 July 2005, she was 82.

My mother’s legacy to me was a love of the arts, especially the theatrical arts, and a love of books and reading. She taught me the pleasure of being creative and the joy of helping others. With every book I read, every word I write, every visit to the theatre, every time I cook and everyone I help, I remember her.