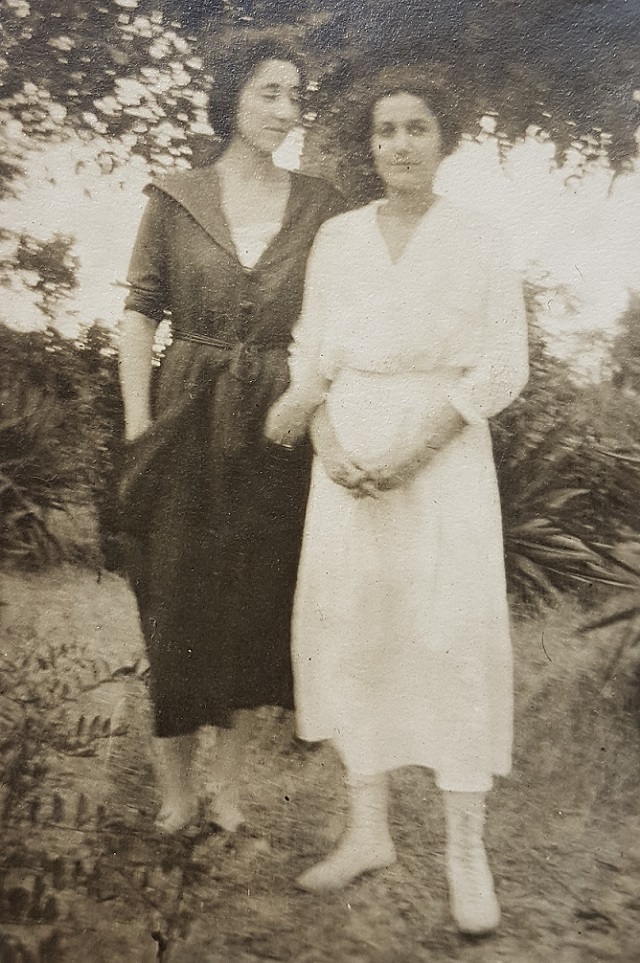 When my grandfather, Paul Woronoff, died in 1969 my grandmother, Olga, was devastated. She was 76 years old when he died, and they had been happily married for fifty five and a half years. Olga was not quite 21 years old when she married Paul and he was her whole life.

Olga never got over her grief. She turned to religion and, as the years passed, she sunk further into depression. Three years after my grandfather’s death, my mother  received a letter from her Aunt Ella – my grandmother’s elder sister (pictured above on the left, Olga on the right, photo taken in 1922 in France) – who was living in Baden-Baden, Germany. Ella, was quite prophetic in her letter (the underlining is hers):

“I admire and love you, and oh how often I would like to open my heart to you and talk of so many things poor Olga (your mother) can no longer understand. I think it a tragedy, that she has decided to bury all her wonderful talents given to her at her birth by God. In the Apostle Story I read as often as I can it is said – every human being has to be active according to her talents. If Olga neglects them she will certainly fade away because there is nothing to create and the cells of her brain remain sterilized. Olga was a brilliant woman. The fact that she mourns for your father has certainly influenced her, but I think she ought to pull herself together, having such a great assistance in the three of you. Believe me, when I noticed in all her letters the absolute lack of interest in anything except her priest, the climate, the flowers and Russian old emigrants who ONLY think of their past and trample on the same place where they were 60 years ago – I dropped trying to help her rise. I never mix in other people’s lives, but here I thought I could help through the example she has before her eyes of how old people as myself can build up a life of their own even after the most terrible experiences of every kind.”

Aunt Ella wrote from personal experience. Her first husband died only two years after the birth of their only child. She was to remarry but that marriage ended in divorce.

My grandmother spent her last years in a nursing home not far from my parent’s house. By that time she could no longer care for herself and was living in the past, strangely enough it was her life in France she remembered, more than Russia. She thought my mother was her sister and she had no idea who I was. She had shrunk in size but insisted on wearing clothes two sizes too big for her.

Senility is one of the causes of death listed on my grandmother’s death certificate. Nowadays we would be more likely to call it dementia. Major depression has been known to cause senility. I wonder if my grandmother would have still lost her mental faculties if she had been treated for depression and had continued to write and create, as she had loved to do for so much of her life.