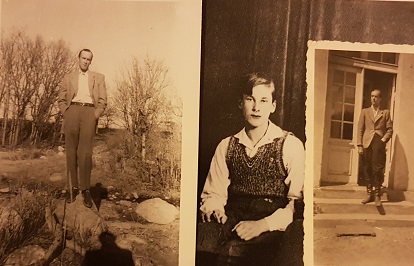 Strangely enough, my father was also born on a Thursday and he too went far in his life, geographically speaking. In fact he loved to travel and to see as much of the world as he could. Unfortunately, some of his travel was forced upon him due to war.

My father was born in Germany, in the same year as the Latvian War of Independence. The year is significant because, if there had been no war, his family would have been living in Courland (as Latvia was then known) and he would have been born on the family estate, like his siblings. As it was, they had fled their home and were living in exile in Germany. When my father was still quite young – maybe four or five – the family moved back to Latvia, to what is now Jelgava, but was then called Mitau. There he stayed until he finished high school and moved to Berlin to start work.

Except he was drafted into the German army – the Wehrmacht – instead.

As much as I have been able to discover, my father either lived, fought or attended training schools in Germany, Latvia, Poland, France, Switzerland, Austria and maybe Italy. The army moved him around a lot.

After the war, and after six months in an American prisoner of war camp, my father worked for a few years in various parts of Germany before migrating to America.

In America he travelled extensively, before and after he married my mother. I know he lived in or visited New York, New Jersey, Vermont, Washington, Washington DC, New Mexico, Arizona, Colorado and California. I know my parents drove from New York to Colorado, so I assume they saw many of the other states as well. My father also visited Canada a couple of times.

When we migrated to Australia we came by ship and the ship stopped in Vancouver, Hawaii, Suva and Auckland before we disembarked in Sydney. At each port my father would eagerly go ashore to see the sights. From Sydney we caught the train – the Indian Pacific – to Perth. For the entire train journey everyone of us was sick with flu. It was not the best of times.

My parents did not travel much once they made their home in Perth, although they did take one trip to the south of Western Australia. I do not think my father ever lost his love of travel, I think PTSD consumed him and he began to be afraid of leaving the house. For almost thirty years, from the day he finished work until the day he died, he rarely left his home. A sad ending indeed.

Melbourne’s public transport and me