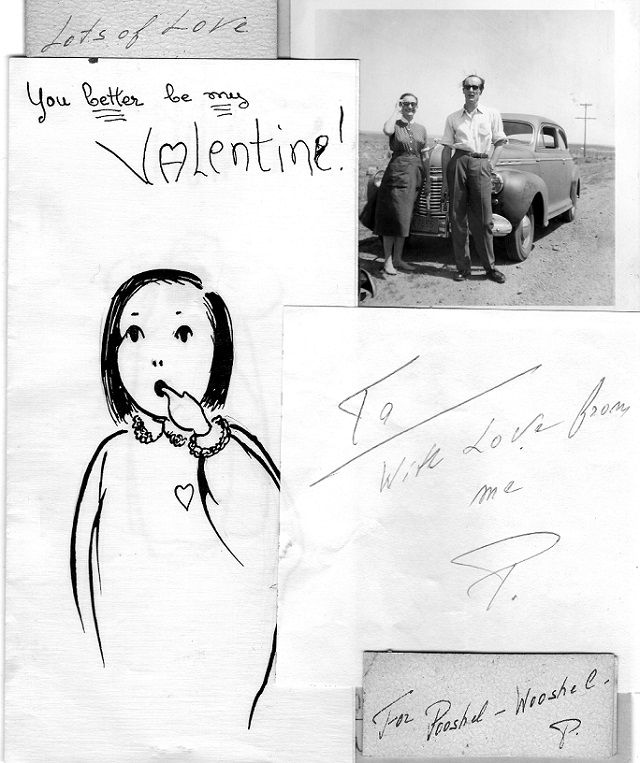 A couple of years before he died, my father told me that my parent’s marriage was “never a love match”. I found his statement difficult to believe because I knew my mother loved him very much. But I had no way of asking her, she had died several years before we had this conversation.

Also, the circumstances of their marriage, which I wrote about here, and the fact that my father proposed such a short time after he met my mother, all point to the case for love at first sight – on both sides. Perhaps this love dwindled over time, but I have cause to doubt that too.

When I cleaned out my parent’s home after my father died I kept most of the documents, letters and notes I found in their possessions. Being a writer it seemed only natural to keep the written word, especially those words which were penned by hand. Amongst the piles of paperwork, I found several notes from my father to my mother, some on scraps of paper, some on gift cards and some on bits of card which had obviously been cut out from something else. Most of them mentioned the word “love”. My mother had saved these notes, many of them were stuck in the drawers of her desk, hidden within other bits and pieces.

From these notes I learnt my parents had pet names for each other. My father called my mother his Pooshel. I have to say it makes me cringe slightly, but I am sure there is some lovely story behind the name. Many of the notes and cards I found are addressed to “My little Pooshel” or “My Pooshel Wooshel” (my eyes rolled at that one), or sometimes just to “Ta” – short for Tatiana of course. For someone who professed to have had a loveless marriage, it seems quite strange that my father would have consistently written little love notes to the one he did not love.

My mother was an artist. For much of her working life she designed greeting cards. I found an example (see above) of a card she drew for my father on one Valentine’s Day. I think it is pretty cute. In the collage above I have added in a few of the notes my father wrote to my mother and a rare photo of my parents together, taken in 1952 – the year after they were married. I like the casual look of this photo. In many photos they are far more posed and serious. I guess most of the time they had to rely on each other to take photos, so the photos I have of them often show one without the other. This particular photo was taken by one of my grandparents. If you look closely you can see my father is holding a box Brownie camera – I still have it.

Actions might speak louder than words, but sometimes the words which were never meant to be public can speak for themselves. That is what I am going to believe.