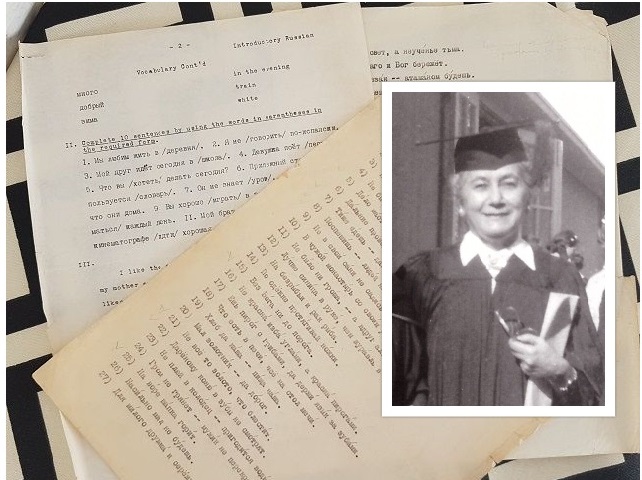 Today I remembered yet another box full of documents and papers which I had put away for sorting. Most of it is loose pieces of paper on which my grandmother, Olga Woronoff, had written notes and stories. Some of them are in English, a fair bit in Russian. The vast majority is handwritten in pencil. My grandmother’s handwriting looks like a spider has dipped their feet in ink and crawled randomly around the page. What I am trying to say is that it is not the easiest writing to read and transcribe. Sometimes the English words even look like they should be Russian!

In the middle of all the bits and pieces of paper, I found some pages on which my grandmother had written the Russian lessons she gave.

My grandmother was fluent in Russian, French and English, and she could also converse quite well in German. As children she and her sisters had governesses for each of these languages. I remember she was also very grateful that her mother had insisted on her undertaking a teaching degree, which she completed in Moscow. It obviously helped her later in life.

I knew my grandmother (pictured above) had taught Russian at Manhattanville College in New York. Although I only have vague memories, as I would have been under five years old at the time, I remember Manhattanville being mentioned a lot in conversation. And I have a few photographs of me with my grandmother’s students and fellow lecturers. What I did not realise until I discovered my grandmother’s resume, was that she had a wide and varied experience of teaching languages.

It looks as though, almost from when they first arrived in America, my grandmother began giving private lessons in both Russian and French. Some fifteen years later her teaching career was launched when, during WWII, she taught an intensive Russian program to members of the US armed forces. After the war she became an Associate Professor at Manhattanville College and taught, not only the Russian language, but also Russian History and Literature as well as French. In the early 1950’s my parents and grandparents relocated to Colorado, where my grandmother taught Russian at the University of Colorado, as well as giving private lessons in both Russian and French. When they returned to New York, she once again taught at Manhattanville.

When I think of all the teaching experience my grandmother had, and the variety of students she taught, it is probably correct to assume how frustrated she must have been that her own granddaughter could not (or would not) learn Russian! No matter how many times she tried to teach me, nothing seemed to stick. Much like today as I once again attempt to learn the language of my maternal family. Learning and retaining the vocabulary and the grammar is much more difficult than I ever imagined it to be. If only I had paid more attention as a child!

Practically Perfect in Every Way

She had an artistic nature combined with resilience