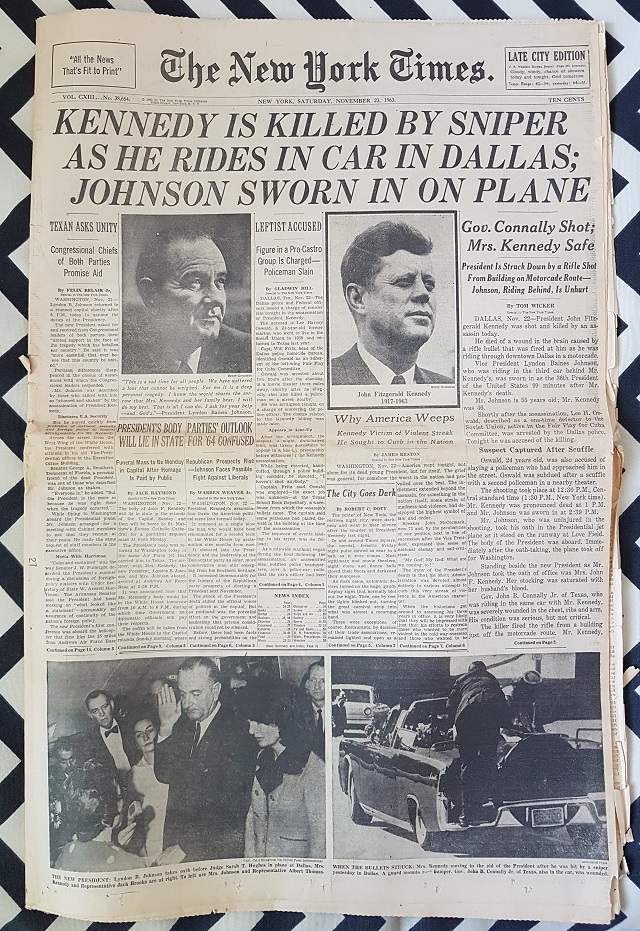 The assassination of JFK was my first memory. It was November 1963 and I was three years old. I remember sitting cross legged, on the carpet, in front of a black and white television watching as the President was shot over and over again. Of course I did not know what I was watching. I know I was at my grandparent’s apartment because they had a television and we did not. They lived one floor below us. I can only imagine either my grandmother was looking after me or my mother and I were visiting her. My grandmother had probably turned on the television so I could watch cartoons while they were chatting in the kitchen.

I am often bemused at the things, the objects, my parents kept for years on end. I constantly wonder why they held on to some things – like blank postcards of places they had seen, or the odd dried flower in some of their books, or newspaper articles of random world events. In this case my father, and I have to assume it was my father who kept these, held onto the actual newspapers with the headlines about the shooting of President John F Kennedy for nearly 50 years.

The assassination was, of course, huge news at the time. Even now people wonder if the true story is yet to be told. But I have so many questions as to why my father kept these newspapers. Perhaps he admired JFK. Perhaps it was purely the news value which enticed him to hold onto the newspapers. Maybe it was the connection drawn between the supposed killer and the Soviet Union. I will never know his reasoning. But it seems odd that he never thought to throw these newspapers out during one of the many times we were to move to another home, town or even half way around the world to another country.

And what do I do with these newspapers now? I have already held onto them for nine years since the death of my father. Why have I not thrown them out already? What is the fascination they hold for me? What am I going to do with them? Am I keeping them simply because they once belonged to my father? I ask myself these and other questions every time I try to sort through the documents, letters and objects I inherited. What is the value – be it sentimental or financial – in these things for me or for my descendants? Are they worth keeping?

I often wish my parents had made the decision for me. I wish they had sorted through everything they owned and thrown out these sort of things. But, despite their best intentions, it never happened. The question is – will I do the same to my children?

A Fading Memento from Decades Ago – How strange is this?

The Ship Called Him More Than The Ocean