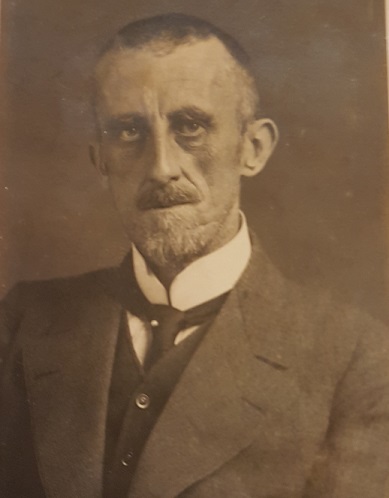 I have written previously about my grandfather, Peter von Fircks (above), here and here and how he was a follower of Rudolf Steiner. My grandfather’s belief in Steiner and Anthroposophy, the philosophy Steiner founded, were to colour his and his children’s lives. All I know about my grandfather, and his devotion to Steiner, come from the recollections of my aunt – my father’s eldest sister.

In 1919 my father’s family lived in northern Germany, having fled from the conflict in Latvia. I am not certain whether it was in Germany my grandfather developed a passion for alternate medicine, or if he had always been interested in it, but it was in Germany that he began to study iridology and homeopathy. I often wonder if it was my grandmother’s chronic, and seemingly incurable, asthma which steered him toward this line of study. Sometime after the completion of his studies my grandfather was introduced to Anthroposophy and it must have resonated with him.

In 1921 my grandfather relocated his family to Bavaria where they lived in various houses until, in 1924, they moved back to Latvia, to Mitau – now known as Jelgava. My grandfather set up a practice there in iridology and homeopathy and also treated his own family, although he was never able to cure my grandmother’s asthma. He made very little money from his practice and the family always found it difficult to make ends meet. At around the same time as the family settled back in Latvia, my grandfather became vegetarian. I have read that Steiner also followed a vegetarian diet, so it is possible this influenced my grandfather.

Now my lack of fluency in German lets me down as I am certain I have not properly translated my aunt’s next journal entry. It seems there was a Eurythmy group in Mitau and my grandfather had some involvement with them. Eurythmy is a form of movement art developed by Steiner. This somehow led to the wife of Dr Steiner visiting my grandparents and offering to give my aunt a free place at the Steiner school in Dornach. My grandfather was ecstatic. He hoped his eldest daughter would learn about everything he believed in. Unfortunately, my aunt was less enthusiastic and wrote that it was the worst time of her life.

My grandfather lived through difficult times: WWI; the Latvian War of Independence which resulted in the loss of the family estate; poverty; the death of my grandmother in 1933; and WWII which saw the death of his beloved son, relocation to Poland and then his last move to what became East Germany. He died not long after the end of WWII, a fragile and lonely man. Through everything he had to endure he credited Anthroposophy for giving him the strength to do so. He probably would have hoped Steiner was correct when he said, “For now he knows that his labor and his suffering are given and endured for the sake of a great, spiritual, cosmic whole.”

Garlic wards off more than Vampires