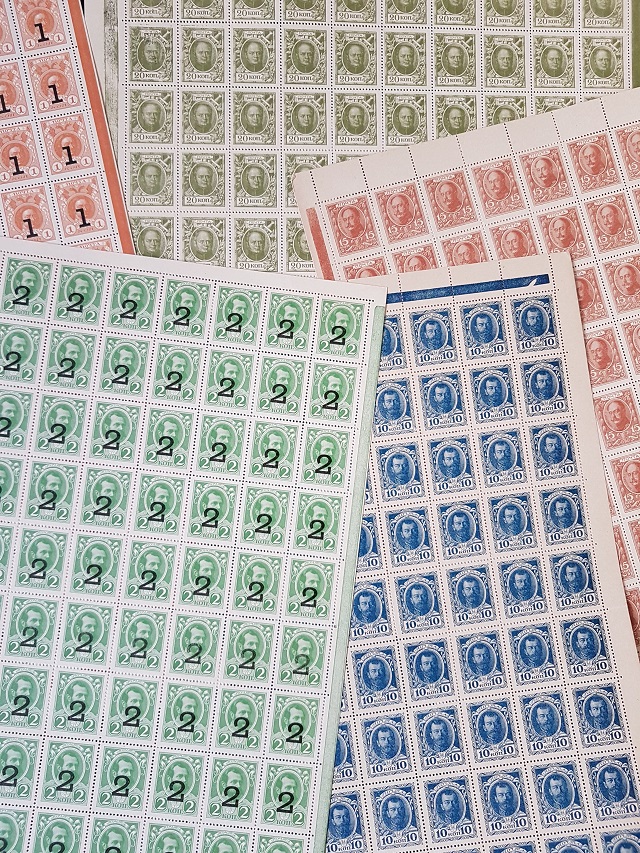 I am often bemused, and sometimes amused, by the possessions my parents and grandparents held on to over the years. My family, for various reasons, were fairly nomadic – even after I was born we relocated frequently – so all the possessions I have inherited had been packed and unpacked numerous times along the way. Some of these belongings were originally from the Baltic States and / or Russia. Including the sheets of stamps pictured above.

There are a few of these sheets in different denominations. They are pretty much in mint condition, so would have been carefully handled during their many journeys. Which poses a few questions for me. Did my grandparents, as they were racing to make their escape on the last ship to leave Novorossiysk Russia, carefully pack these sheets of stamps in the bottom of their suitcase? Or were they permanently in the suitcase, gently lying in their brown paper covering, waiting for whatever need arose? Or perhaps my great-grandmother brought them out of Russia with her when she finally managed to leave. And why keep stamps?

After a bit of a hunt for information, it appears that blanketing all Russian stamps under the one description is naïve. Stamps from Russia can be classified in political periods – those of the Russian Empire up to 1917, those of the Civil War from 1917 – 1922, those printed during the Russian Soviet Federated Socialist Republic during the same time period, those of the USSR from 1922 – 1991 and then finally those of the Russian Federation, which brings us to today’s stamps. The first postage stamp in Russia was issued on December 10, 1857.

I believe the stamps shown above were printed as part of a series of seventeen commemorative stamps which were issued on January 2, 1913 for the celebrations of the Tercentenary of the Romanov Dynasty. According to the Museum of Russian Art, these stamps were issued with the portraits of the Tsars, both the ones from the past and Tsar Nicholas II, at the time the ruling Romanov. They had been designed by renowned Russian artists: Ivan Bilibin, Evgenii Lancerey and Rikhard Zarrinsh. Interestingly, the choice of the Tsars portraits on these stamps caused controversery as many traditionalists believed placing a postmark over the likeness of any of the Romanov images was akin to sacrilege. With hindsight, and with true Russian fatalism, the cancelling of the Tsar’s image eerily proved their worst fears to be true. Information from this site: https://tmora.org/currentexhibitions/online-exhibitions/postage-stamps-messengers-of-the-soviet-future/from-the-double-headed-eagle-to-the-hammer-and-sickle/the-romanovs/

History is fascinating and I love being able to find out more about the history my ancestors lived through. Each time I research one of the possessions which I have inherited, I find out new information. And I usually end up with more questions than answers! I am pretty certain that, just by writing this post, someone out there will contact me with more facts about these stamps. Who knows what I might learn.

The haunted manor house where she was born