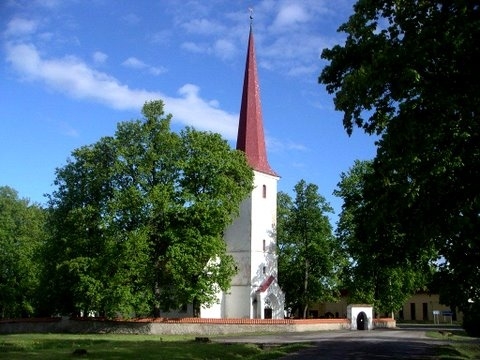 Does your family have a connection with a geographical place? I had to think about this for a recent writing activity which I had to produce for my study. Both my maternal and paternal sides of the family have connections with geographical places. But one example immediately sprang to mind. Since it was built, until 1918 when my grandfather and his family fled Latvia, their church was one of the most important places for the Nurmhusen branch of the Fircks family.

The church is situated in the town of Nurmes, in the Lauciene district of Latvia. The family estate, Nurmhusen, lies within a short drive of it. Built in 1594 by Georg von Firks, the church was the religious centre of the Fircks family for more than 300 years. For centuries members of my family were christened there, attended services there and some of them are buried in the grounds around it. My grandfather was confirmed in the church in 1893. Two of my aunts and my uncle were born in Nurmhusen, so I imagine they were also christened at the church. Under the church is a crypt which houses the remains of some of my ancestors, including Georg, who died in 1600, Christopher I, who died in 1649 and George Friedrich, who died in 1776.

At the end of World War II, Russia invaded Latvia and the church suffered at the hands of the Soviets who vandalised the building and its surrounds. Art works were stolen, the coffins in the crypt destroyed, their contents strewn across the floor. Thanks to the efforts of my cousin, Wolf Lackschewitz and the financial contribution of many family members, including my father, the restoration of the church began in 1991. The remains of my ancestors have been replaced in their coffins and the crypt repaired. In 2007 the roof of the church was replaced.

In 2014 the church celebrated its 420 year anniversary. I attended this celebration, together with other Fircks family members. All of us had to travel to get there. As far as I know there are no longer any Fircks living in the area. I arrived at the church not knowing what to expect. We were greeted by news cameras and reporters. I had not realised the event would draw interest from outside our family, but the church was considered important to the history of the area and the restorations had attracted attention.

In 2017 I visited the church again, this time with two of my sons. We were fortunate that one of the local pastors took the time to show us around the church. He even took us into the crypt underneath the altar. It was a surreal moment to stand there in the half light knowing we were surrounded by our ancestors.

Even though our family no longer lives at Nurmhusen, or attends the church at Nurmes, I think we still have a spiritual connection to the church. It houses our ancestors and holds the stories of our family within its walls. If only the stones could speak.