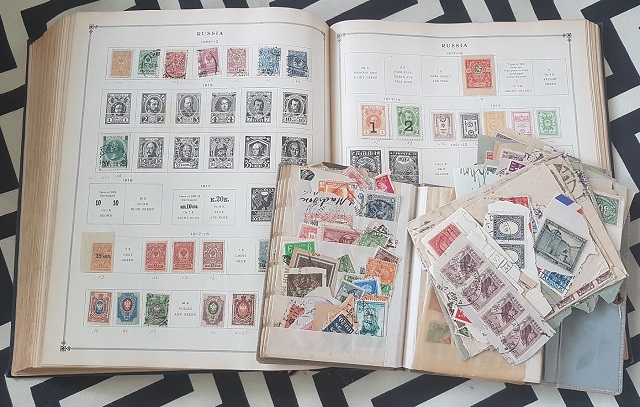 Although I gave away and threw out many of the things my parents collected, such as a large pile of magazines, unopened newspapers, recipe books and empty margarine containers, I kept my mother’s stamp collection, even though I have no idea what to do with it.

It appears that, as a girl, my mother began to collect stamps. She glued them into a thick stamp collectors’ book which has pages dedicated to different countries, with sections for stamps from different years. There are stamps from many different countries – USA, Canada, Russia, and Romania among them. The stamps which did not make it into the book were placed in a small kind of folding hard cover envelope, and those which made it into neither were jammed into envelopes and little plastic bags. I brought them all back to Melbourne with me and they now sit in a bookshelf gathering dust. One day, I tell myself, I will find the time to sort through them all – although I know I will never really have the time or the motivation to do it.

The very first stamp in the world is believed to be the One Penny Black, created in Great Britain during the reign of Queen Victoria, and it has her image on it. Nowadays this stamp can fetch anywhere between $100 and $3,000, depending on the condition. The creation of that stamp was also the catalyst for the hobby of stamp collecting. Over the years many people, even celebrities like John Lennon and Freddie Mercury, have become stamp collectors and sometimes the stamps and the collections can be worth a huge amount of money. I discovered, after an online search, that there was a stamp from British Guiana which sold for $9.4 million!!! Imagine finding that little beauty sitting quietly somewhere in your house.

I wish my mother’s collection was worth even a small portion of that amount but, unfortunately, I believe her stamps are worthless. Not long after I brought them home with me, I took one of the small bags of stamps to be valued and the professional philatelist behind the counter of the small store in the suburbs of Melbourne barely looked at them before pronouncing them to be of no value. This was, of course, disappointing but not unexpected. Most of my parent’s possessions, which they had believed to have had some monetary value, have proven to be only of sentimental worth.

Yet, despite knowing it is worth nothing from a monetary perspective, I hang on to the stamp collection. There is a small part of me which holds the hope that, if I ever get the time to search for each individual stamp online, maybe – just maybe,  I will find one which is desirable and therefore valuable. There is also a larger part of me which simply does not want to throw out something my mother spent so much time over. The stamps she collected give me some insight into her childhood, a connection which is difficult to throw out.

My father also had far to go…