Now and again I pull out one of the large plastic tubs which house the memorabilia I brought from my parent’s house. Much of the memorabilia is letters, documents and various bits of paper, written in Russian or German. There is not very much in English. If I ever have the finances to be able to hire a translator, there are years of translating in front of them.

There are a few photographs from both sides of the family. Luckily some of them have explanations scribbled on the back, sometimes I can read them, often I can’t. Again, most of them are either in Russian or German. Often the date is the only bit I can read. There are plenty of photos which have no explanation at all. Most of them are of people I don’t recognise.

From my mother’s side of the family, apart from family photographs, there are images of the Russian royal family. I have several envelopes full of photos and postcards of Tsar Nicholas II, Empress Alexandra and their five children: the Grand duchesses Olga, Tatiana, Maria and Anastasia and the young Tsarevich Alexei. I even have a few of the old glass negatives.

This afternoon I was once again sifting through the tubs when I came across the two photographs pictured. To be honest, I’m not certain they are photographs. They look like they have been printed on thin cardboard. Both of them are black and white. Each of the images are approximately 29cm wide and 23cm high. The reverse side on both of them is blank. I cannot find any printer’s or photographer’s marks.

They both appear to be taken at a coronation. I can only assume it is the coronation of Tsar Nicholas II as the images have a vague similarity to him. In one he is lifting a crown above his head, in the other he is wearing the crown.

I wanted to find out more about these images, so I searched the internet and discovered I was right – they are not photographs. They are both black and white reproductions of paintings of the coronation of Tsar Nicholas II and Empress Alexandra.

The first is an oil on canvas, painted by Henri Gervex. It is titled “Study for the Coronation of Tsar Nicholas II and Tsarina Alexandra, at the Church of the Assumption, Moscow”.  Gervex (1852-1929) was a French painter, commissioned to paint the coronation.

The second was painted by Laurits Tuxen and is titled “Coronation of Nicholas II and Alexandra Fyodorovna in 1896”. The original painting is an oil on canvas. Tuxen (1853–1927) was a Danish painter and sculptor who travelled throughout Europe, painting portraits of European royal families, including the Russian Tsar and Empress. 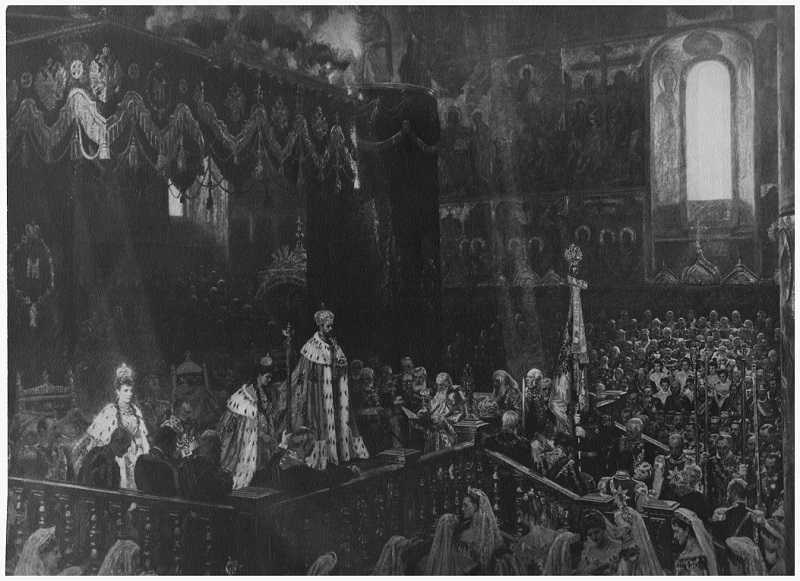 I know the Tsar and his family meant a lot to my grandparents, which is most likely why they kept these reproductions. But I wonder what to do with them. I keep them only out of respect for my grandparents. One day I will have to decide what to keep. Preferably before I die and my boys have to do the sorting.