These were the siblings of my grandmother. In this picture her eldest sister Clair and her brother Dima are shown performing a Russian dance. 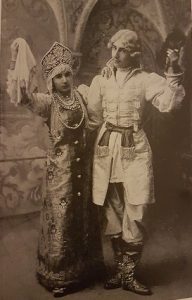 Cleopatra was called Clair as she detested her given name. She was, according to my grandmother, sensitive, kind, straightforward and truthful. She acted older than her years and was therefore treated as if she were grown up. She took to heart the task of ensuring her younger sisters, who she called The Little Ones, and her brother grew up to be “good”. Clair was almost fanatical in her patriotism toward Russia and disliked travelling abroad. When she was old enough she took courses in nursing.

Vladimir, or Dima, was a reserved boy who was also shy. My grandmother describes him as handsome and extremely intelligent. He had a very artistic disposition and a highly developed sense of beauty. He was very musical, played both the piano and the mandolin, was a great reader and had a wonderful sense of humour. He and my grandmother were very close, but I can never forgive him for telling her she did not turn out pretty like her sisters!

Next in line was Natalie, or Tata, who was the imaginative one in the family. She lived in a fairyland of her own and, according to my grandmother, used to tell them long, mysterious, breathtaking stories which held them spellbound for hours. Tata was always the leader in their games, if there was to be a queen it would be Tata, if there was to be a witch, she would perform the role.

Helen, or Ella, was nicknamed “Quicksilver” by their governesses and teachers as she gave them the most trouble. She was always lively and up to some mischief; was caught, punished and forget it the next moment. My grandmother states that to punish Ella was easy, you simply had to keep her quiet. She was usually given crocheting to do.

My grandmother, Olga, was the youngest and describes herself as the cry-baby of the family. I find that hard to believe as I remember her as being kind, loving and always having time to play with me. She also tried to teach me Russian but, due to my lack of interest, failed miserably.

By the end of the Russian Revolution, only my grandmother and her three sisters survived. Dima had been killed during the Revolution by Bolshevik soldiers. Clair escaped to Bulgaria with her children, who caught influenza during their flight and died. Tata and Ella escaped with my grandparents to France where they stayed when my grandparents migrated to America. One day I hope to find out more about them and see if I have any relatives left on my grandmother’s side of the family.