If she were still alive my mother would have celebrated her 100th birthday on the 9th of November this year. When I was reminded of this, I realised how little I know about her. I remember asking her about her childhood but I can only recall one or two stories that she told me.

My mother, Tatiana Pavlovna Woronoff, was born on the Boulevard Saint-Barthélémy, Nice in the south of France. Why Nice is a question I have yet to answer. At the time of my mother’s birth I believe my grandfather was working on the other side of Marseille, some 300km from Nice. I know my grandparents were quite poor at the time and apparently the place my mother was born had a community of holy sisters who tended to the ill and poor, so perhaps that was the reason. I also know the doctor who delivered my mother did not charge for his services. On the 18th of November 1922 my mother was christened at the Russian Orthodox cathedral in Nice.

From here on in my mother’s early years are a matter for conjecture. I believe that my grandfather continued to manage a vineyard in the south of France until around 1925 when the family moved to Paris. This is speculation on my part, based on the photographs of my mother which actually have dates on them – not too many do!

In 1928, some five months before her sixth birthday, my mother and grandparents immigrated to America. One thing I find amusing in the information on the passenger list of the ship, is that my mother is listed as speaking no languages! My grandfather is listed as speaking Russian, English and French, my grandmother as speaking Russian, English, French and German, but my mother – none at all! I am positive she could at least speak Russian and French but perhaps at only five and a half years of age, it was not considered necessary to note down.

Where did the family go when they first reached America? I am not certain. However in the 1930 Census they are listed as living in Pennsylvania. I know they lived in Wayne for a period of time, perhaps that is where my mother first went to school?

One of the few stories I remember my mother telling me was about her first year at school in America. She did not speak much English at the time and recalled being teased by the other children. The school desks had inkwells in them and one day she discovered that the boy sitting behind her had dipped the ends of her hair into his inkwell! I always had the impression that her early years of school were quite miserable.

Later on, in college, my mother blossomed. She had many friends and was happily pursuing a creative career in the arts and fashion industries. My mother was always close to her parents and, through their correspondence, which I have inherited, I hope to piece together more of her life story. 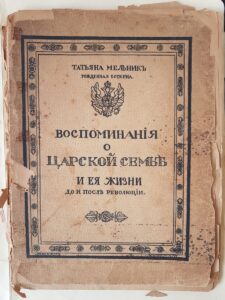