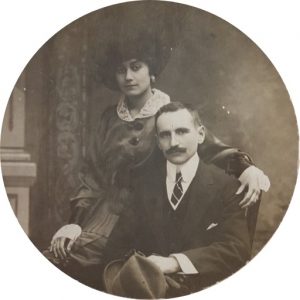 You would think it would be easy to pinpoint the important dates in your ancestor’s life if they had written a memoir. Unless, of course, your ancestor was a minimalist with dates – like my grandmother.

My grandmother wrote a memoir, Upheaval, but instead of using dates or years to place an event, she sprinkles other events into her story so one must estimate when those occurred before being able to calculate anything else.

Take, for example, the first meeting of my grandparents, Countess Olga Kleinmichel and Lieutenant Pavel Voronov. I wanted to find out when they met for the first time. My grandmother wrote about their first meeting in her memoir, “Soon, at a dance at the Princess Bariatinsky’s, I was presented to the Emperor and to two of the young Grand Duchesses, Olga and Tatiana. At this party I also met my future husband, Paul Woronoff.”

There is much conjecture that they first met in November 1913 at a ball in the Crimea given by Princess Maria Bariantsky, but I think their first meeting was at least two years earlier. I am basing this on events described by my grandmother. Firstly she writes about the marriage of her eldest sister Clair. Clair’s eldest child was born in 1911 so I assume Clair was married in 1910. Then my grandmother writes of her sister Ella’s marriage. Now Ella married twice, the second time in 1919. Her first child was born in June 1913, which means she would have fallen pregnant in September 1912. Ella was engaged in winter (my guess is winter of 1910) and married before the summer of the following year (1911) as my grandmother writes: “her wedding was celebrated in Moscow, which left but a small family of us to spend the summer at our beloved country place”.

In the autumn of the same year Ella was married, my grandmother was invited to spend time with a friend of hers in Yalta and it was during this holiday she attended a dance given by the Princess Bariatinsky. At this dance she first met my grandfather. Now my grandfather was promoted to the Navy Guards in May 1910 and I have seen photos of him with the Grand Duchesses on the Imperial yacht the Standart from 1910.

Another reason I believe my grandparents met in 1911 is that my grandmother wrote: “There were many more parties at Yalta where I met again the young officer, Paul Woronoff, to whom I was to be married before many years had passed; but the evening that still remains delightfully in my memory is that of the celebration of the Grand Duchess Olga’s sixteenth birthday.” The Grand Duchess’s birthday celebrations were held in November 1911 and I doubt my grandmother would have written “before many years had passed” if she had met my grandfather in 1913, as they were married in 1914. Also, between an autumn dance and the November birthday celebrations there was time for “many more parties” to happen.

One more reason for assuming my grandparents met in 1911, is that my great grandfather died on 26 October 1912. I seriously doubt my grandmother would have been attending dances or parties in the month after her father’s death.

Where were the Voronovs in the 1920s? Finding their footsteps in exile

The Ship Called Him More Than The Ocean