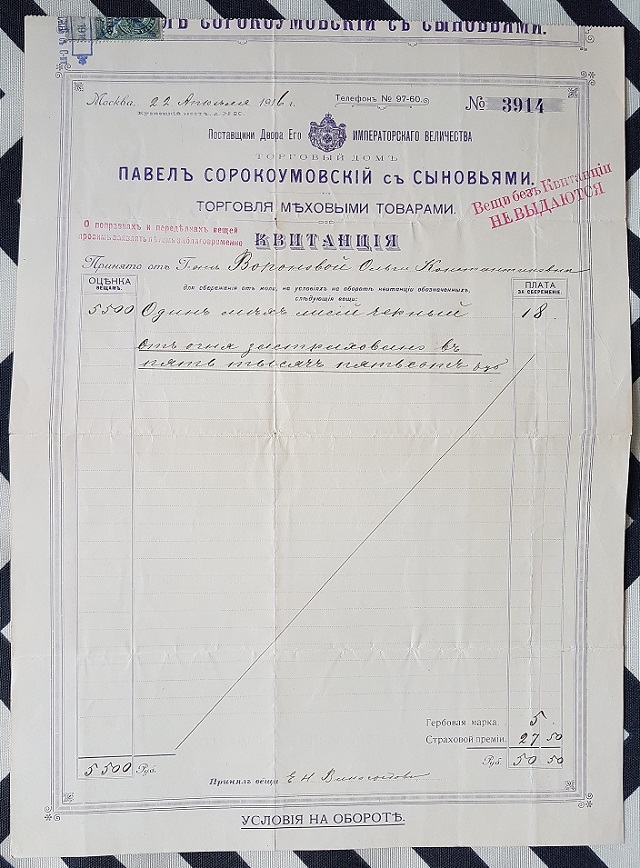 I often find documents in the many papers I inherited, which make me wonder about why they have been kept for so long. Documents which nowadays we would (and I do) throw out after they are no longer needed – of course many of our documents are now virtual. In the papers I am attempting to translate and file there are bank statements, loan statements, various receipts and this document, which is apparently a receipt for a fur coat, which my grandmother, Olga Woronoff (Voronov) had placed into storage.

The receipt is dated April 1916, which would have been spring in Russia, a season when fur coats would most probably be no longer required. I am unable to translate the handwriting in the middle of the receipt and I wonder if it gives the length of time that her coat was to be stored. I find it fascinating that the receipt, together with many other papers, documents and certificates, journeyed with my grandparents from Russia, through three other countries and finally to Australia.

What I do know is that her fur coat was stored with a company called Paul Sorokoumovsky with His Sons. Apparently the Sorokoumovsky fur business began in the early nineteenth century and started trading under that name in the middle of that century. According to Wikipedia, the Sorokoumovskys won the competition to supply the fur for the fur mantle which was worn by Tsar Nicholas II during his coronation ceremony. After that they were entitled to call themselves “Supplier of the Court of His Imperial Majesty”.

The evaluation of my grandmother’s fur coat was recorded at 5500 rubles and I have attempted to work out how much that would equate to in today’s currency. I will preface my calculations by admitting that maths is not my favourite subject and I could be wrong, but – after Googling historic currency converters – it appears that the equivalent value today would be US$20,605!

I wonder what happened to the fur coat. Was my grandmother able to collect it from storage? The fact that she kept the receipt makes me think she was unable to recover it. In 1916 my grandfather, Paul Woronoff (Pavel Voronov) was fighting for Russia in World War I, I have yet to discover exactly where he was.

In my grandmother’s book Upheaval, she mentions a fur coat when she is describing her journey from what I believe was the coastal town Yevpatoria, to join my grandfather in Kharkov. She writes: “I packed my things in a little handbag. Tata (her sister) gave me one of her coats to wear as it looked somewhat more democratic than my sealskin, being only lined with fur.” Later, she mentions she was wearing a long coat and she felt quite hot in it.

Could it have been her sealskin which had been in storage and which she left with Tata? Or perhaps she owned more than one fur coat? I doubt I will ever find the answers.