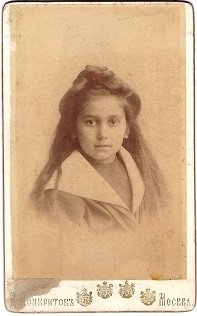 Does anyone still recite the nursery rhyme “Monday’s child”? I believe it was written to help children learn the days of the week. It goes:

Monday’s child is fair of face

Tuesday’s child is full of grace

Wednesday’s child is full of woe

Thursday’s child has far to go

Friday’s child is loving and giving

But the child who is born on the Sabbath day

Is bonny and blithe and good and gay.

When I was in primary school I quite liked that rhyme (having been born on a Sunday) and I painted the panels of my bedroom door to match the words.

Tomorrow will be my maternal grandmother’s birthday. Countess Olga Konstantinovna Kleinmichel was born on Thursday 4 May 1893, at her father’s family estate in Potchep, in the Bryansk Oblast of Russia. Today Potchep sits quite close to the borders of Ukraine and Belarus. She was the youngest of five children.

The nursery rhyme accurately predicted my grandmother’s future. She certainly travelled far and wide throughout her life. As a young girl she lived first in Potchep and then, after fire damaged the house, the family moved to Ivnia in the Kursk Oblast of Russia. But, when my grandmother was growing up, the family spent most of the year in Moscow, only passing the summer months in Ivnia.

As a young girl it seems my grandmother travelled through Russia and parts of Europe. She visited the Crimea where she was presented to the Tsar and his family and where she met my grandfather, Pavel Voronov, for the first time. She and her sister went to Sweden, where they visited their friend, Grand Duchess Marie, who had married Prince William of Sweden. They also toured the French Riviera (where my grandmother had earlier spent time recuperating from illness) and Italy. When they returned the family had moved to St Petersburg.

After my grandparents married, they too made their home in St Petersburg, after a brief honeymoon in Nice, France. But their happiness was not to last for long. The Russian Revolution, WWI and the Russian Civil War would soon see them moving from one place to the next, trying to stay ahead of the Bolsheviks who had put a price on my grandfather’s head. Eventually they would leave Russia forever. Sailing out of Novorossiysk to Constantinople before living in exile for several years in France.

From France my grandparents immigrated to America where they lived until my grandfather’s death in 1969. In America they relocated several times living in at least three different states that I know of. By 1970 our small family, including my grandmother, immigrated to Australia and she spent the last years of her life living with us in Perth, WA. By the time she died in 1982, aged 89, my grandmother had spent most of her life outside of her beloved Russia. She certainly lived up to the prediction in the nursery rhyme!

What is my writing goal?