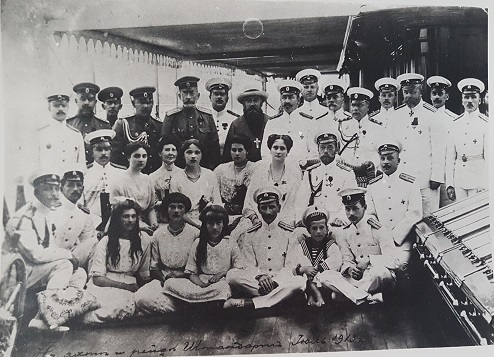 My grandfather was a lieutenant in the Russian navy. He served on the Imperial Yacht, the Standart, which had been built by the order of the Russian Emperor Alexander III.

This photo shows a group of Russian naval officers, together with Tsar Nicholas II and his family. It is taken on the deck of the Standart, so I assume the men all served on board the yacht. My grandfather, Pavel Voronov, is sitting cross legged in the front row between the Tsarevitch Alexei and Grand Duchess Anastasia. Both of the children are leaning on my grandfather’s knees. Behind my grandfather is the Empress Alexandra. What I love most about this photo is that Alexei has bare feet.

My grandfather was close to the Romanov royal family. Empress Alexandra played a major role in the wedding of my grandparents. After the wedding the Tsar, Empress and their children greeted my grandparents at their home, giving them an icon and the traditional large round loaf of black bread, crowned by a silver dish which was filled with salt. These were the traditional symbols of prosperity and welfare.

I have already written about my grandfather and the Tsarevitch here, and the rumours that he was the love interest of Grand Duchess Olga here.

On the 28 June 1914, Archduke Franz Ferdinand, heir to the Austro-Hungarian throne, was assassinated in Sarajevo, causing the eruption of World War I. At the time the Russian Imperial Family were holidaying on the Standart. On 1 August 1914, Germany declared war on Russia. That day, according to my grandmother in her book Upheaval, “The Emperor and his family came to St Petersburg from Peterhoff. It was my husband who was at the steering-wheel of the Imperial steam barge that brought them from their yacht to the Winter Palace on the Neva.”

In February 1916 my grandfather was transferred to the ‘Svodny Polk’. My grandmother describes it thus: “The ‘Svodny Polk’ was a regiment of officers and soldiers chosen for a short service every two years, from those regiments having a member of the Imperial Family for honorary commander. The ‘Svodny Polk,’ with other troops, formed the bodyguard of the Tsar and his family.”

The last time my grandparents were to see the Tsar and his family was in either late January or early February 1917. My grandfather had suffered heart problems and was instructed to travel to a health resort in the Caucasus to recover. Before their journey, my grandparents visited the Empress and her children. She always remembered what a happy family they were at that time.

With the Russian Revolution and the abdication of Tsar Nicholas II, and later the assassination of him and his family, the Standart was stripped of her royal trappings and sent out to war. Eventually she was converted to be able to deploy explosive mines. She also served in World War II and later became a training ship. In 1963 she was scrapped.

100 Year Old Nun in the Family