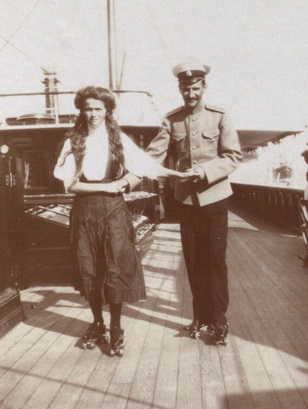 The day I Googled my grandfather’s name in both it’s Russian form (Pavel Voronov) and in English (Paul Woronoff) I could never have predicted what I would discover. Apparently, my grandfather, who I knew as Dadu, was one of the love interests of Grand Duchess Olga Nikolaevna, daughter of the last Russian Tsar. Dadu, by the way, is short for Dadushka, Russian for Grandfather. When I started to talk, Dadu was all I could manage.

I was taken aback by my findings. I knew my grandfather had served on the Standart, the royal yacht of Tsar Nicholas II. I knew, from reading my grandmother’s book, Upheaval, that he had been close to the royal family, but I had never imagined that one of the Tsar’s daughters could have fallen in love with him.

According to Helen Rappaport, in her book Four Sisters, Olga first met my grandfather Pavel Alexeevich Voronov, on 10 June onboard the Standart. Rappaport writes, “Soon they had a favourite trysting place, between the telegraph room and one of the ship’s funnels, where they often sat chatting with Tatiana and her favourite, Nikolay Rodionov.” At the time my grandfather was twenty-seven and Olga would turn eighteen the following November. Rappaport mentions that everyone at Olga’s eighteenth birthday dance, noticed that “she danced a great deal with Voronov.”

During the five or so months of Olga’s infatuation, my grandfather often spent time playing tennis with the girls and their father, in Four Sisters, Rappaport writes that my grandfather “was Nicholas’s favourite partner at the game.” She also writes they would go for walks, swim, watch films and play card games together. In the picture above, my grandfather is seen roller skating with Olga, on board the Standart.

In her book, Upheaval, my grandmother recalls meeting the two young Grand Duchesses, Olga and Tatiana, “The latter, to my idea, was the prettier of the two; but both had the simplicity of manner that is the greatest charm in every person and especially in anyone who holds such a position as theirs.” It was at the same party that my grandparents first met. Later in her book, my grandmother writes, “The four sisters were all very different. The eldest, Olga, was very intelligent and gay and had a heart of gold; but she was also rather timid, so that her sister Tatiana, who was much more sociable, was easier to get on with at first.” I wonder if Olga was not as sociable because she knew my grandmother had caught the eye of her darling Pavel.

When I read these stories about my grandfather, I feel as if I’m reading about someone else, someone in history, distant from me. I find it difficult to relate these stories to the grandfather remember only in patches. The few memories I have of him are of an affectionate grandfather who loved to spend time with me and play with me. He died when I was nine and I so wish he had lived longer.