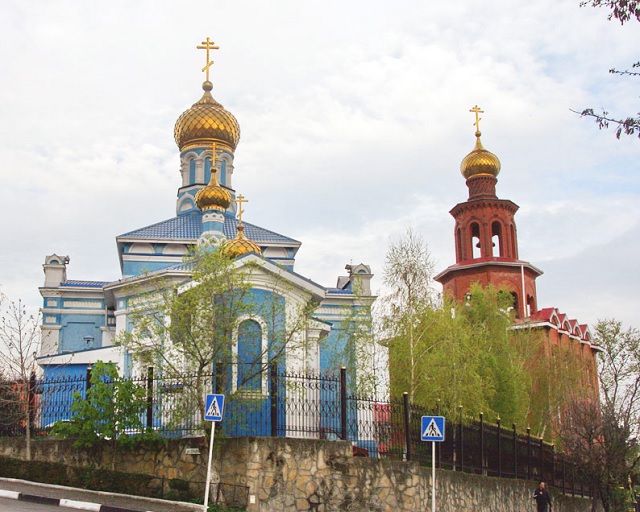 My grandmother did not spend her last Easter in Russia at the beautiful Assumption Cathedral in Novorossiysk (pic above) but she did help decorate it on the Saturday afternoon before Easter, as described in her book, Upheaval. She was in Novorossiysk in the spring of 1919 waiting for my grandfather to return from Ekaterinodar. As she helped to string garlands of artificial flowers over the icons, she remembered past Easters:

“All day Saturday preparations for Easter are made, both in church and at home. At home the traditional ‘koulitch’ (a high and round cake with raisins) and ‘paskha’ (a sweet dish made of fresh cheese-curds, eggs, raisins and finely cut candied fruit) are being made; and great numbers of eggs are being painted. It is also a custom to send flowers to friends at Easter, and quantities of them are brought to the house all through the day. One koulitch and a paskha and a dozen or so of painted eggs are taken to church in the evening to be blessed, for it is with them that one is supposed to break the fast at the midnight supper. In Moscow, where we were so many, this supper was always served in our ballroom at a huge table which was set as for an ogre’s feast.”

My grandmother goes on to describe the Easter midnight service with the candlelit procession streaming three times around the church. At the stroke of midnight the priest knocks on the closed doors of the church and they are triumphantly opened as the church bells ring joyfully. The congregation greet each other with “Christos voscresse!” (Christ has risen) to which the reply is “Voistinou voscresse! (In truth He is resurrected). It is in stark contrast to her last Easter in Russia:

“Having hung the last modest little paper flower, I hurried home and lay down to rest before the midnight service, feeling rather weak as I had not had much to eat in the last few days. Food was very scarce in the city – too scarce even to supply a fast day meal. I dropped off to sleep and did not awake until the loud ringing of the church bells startled me. The Cathedral being too far, I decided to go to the nearest church. I practically ran all the way.

Bordering the path that ran around the church there sat on the ground a row of peasant women and men. In front of each of them, on an outspread clean towel or cloth, was a tall ‘koulitch’ with a lighted candle stuck in it and surrounded by a heap of dyed eggs.

Although I had to remain outside the church, (it was already full) I could follow the service very well as the prayers and the singing were distinctly heard outside. Alone in that crowd of peasants who were praying fervently around me, I did not feel lonely or lost. Far from it. In that unforgettable night I realized fully that distance and death do not mean separation. I felt a heavenly conviction that although all my dear ones were so far from me, some I knew not where, and although some had left this world, we could not fail to meet in thought and prayer on this holy night.”

You Are a Story

Talking of pandemics – typhus, typhoid fever and cholera in 1919