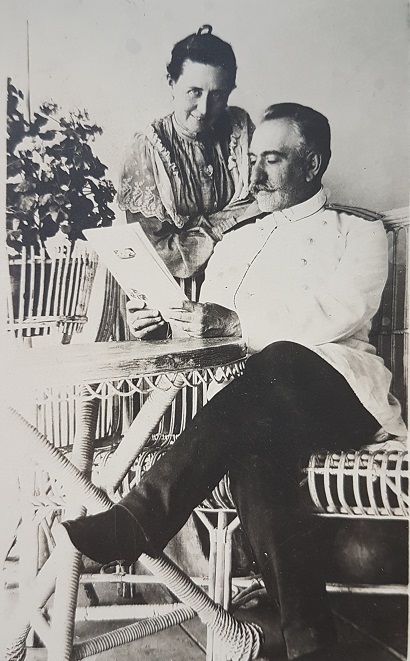 Searching for information on my maternal grandfather, Pavel Voronov (Paul Woronoff) uncovered more material than I ever thought possible and I have written quite a few posts about him. However, moving one generation up the tree and the information is more difficult to come by. Naturally, if I could read Russian, I might be able to find out more, but I am lucky to have wonderful contacts in Russia and, through them, have discovered some facts about my maternal great grandfather. One of my contacts has an Instagram page where she posts some lovely photos and information – if you can, check it out!

The photo above is of my maternal great-grandparents, Major General Alexei Alexandrovich Voronov and his wife Anna Pavlovna. Alexei Voronov was born on 24 February 1850, somewhere in the province of Kostroma. He was born into one of the “new” aristocratic families, termed “dvoryane”. Which means that someone in the Voronov family must have done something outstanding, as being made “dvoryane” was a reward for perhaps winning a battle or helping the Tsar in some way. Being aristocratic did not necessarily mean they were well off though, but the family can be traced back to 1616, so they have been around for awhile.

Alexei was a military engineer, who seems to have supervised construction in Shlisselburg and Pella, both near St Petersburg, later moving to Tsarskoye Selo, south of St Petersburg and now known as Pushkin, where he worked at the railroad. He had the interesting job title of “Engineer Distance of Tsarskoye Selo” – I have no idea what that means!  By 1909 he had been promoted to Major General and was the head of the engineering team of the fortress of St Peter and St Paul in St Petersburg.

My great grandfather, Alexei married twice, the first time to Antonina Dmitrievna Krahotkina, whose father was a St Petersburg merchant, and they had a daughter, Lydia. Lydia grew up to be a rather famous Russian writer of her time, writing under the pen name Lydia Charskaya. In her biography, Lydia wrote that her mother had died in childbirth. She was ten years old when Alexei married for the second time.

His second wife was his second cousin, Anna Pavlovna Voronova, who was seven years his junior. Apparently it was not uncommon at the time, especially in aristocratic families, to marry your cousin. You did have to apply to the church for special permission, but it was mostly granted. Alexei and Anna had four children: my grandfather Pavel, his brother Alexander, and two sisters Anna and Natalia. I met Natalia when I was ten years old but knew her only as Great Aunt Natasha.

On one of the Voronov family trees it looks as if both my great grandparents died in 1917, but I could be reading it the wrong way. A forum I found online lists my great grandmother Anna’s death as 1912, from senility! Obviously I have more research to do.

I like this photo of them. They look happy and relaxed.