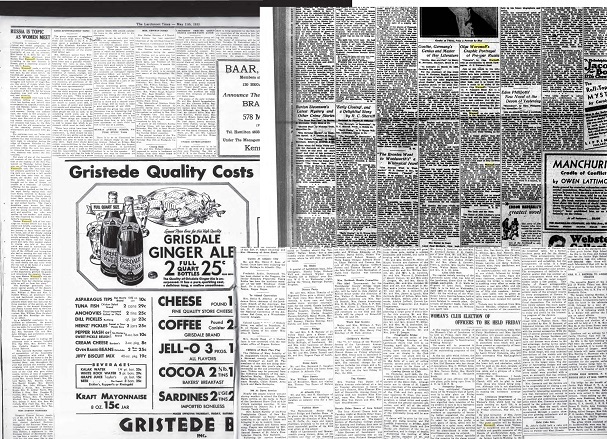 You never really know what you are going to find when you begin to search the archives of newspapers. This past week I have uncovered a few treasures.

At the beginning of the week I used Trove to find more information on an Australian WWI soldier who I am researching for an assignment. Trove should be renamed Treasure Trove as I managed to find articles which told me where he worked – something I had not been able to find out before. I also uncovered a short article describing how, as a 12 year old, he had been assaulted by a 10 year old and his mother had gone to court with a complaint!

With such success I decided to search the US digitised newspapers for any mention of my grandparents. I found several articles, some of them barely more than a line or two, but still worth reading. I discovered that my mother, aged 20, was at the time living in Haverford, Philadelphia and that in the July of 1942, she was going to spend some time in Little Compton, Rhode Island. Two years later my mother was once again leaving Haverford, this time she was going to New York to continue her studies in art.

Ten years before my mother left on her holiday to Little Compton, my grandmother published her book Upheaval, about her life in Russia before and during the Revolution. In February of the same year she gave a talk at a women’s club about Russia. On Saturday 19 March 1932, The Philadelphia Inquirer published a glowing review of it. The concluding paragraph was particularly delightful to read, “Upheaval should not be missed by those who are truly interested in the Russian experiment and its inception. Also it should not be missed by those who seek excitement, high adventure and devotion in their reading.”

In 1933 my grandmother continued to give talks, this time to the Literature Department of the Women’s Club in Larchmont, again on the topic of Russia and her book which is described as, “one of the most reliable and graphic accounts of the Russia of pre-Revolution days, and of the first terrible days of Terror.” The article states that “Mrs Woronoff has promised to give some account of the writing of her book” which just makes me wish I had been there. In the newspaper the week after my grandmother’s talk, there is an account of how she went, although I’m not quite sure how to interpret this sentence, “Madam Woronoff made a striking picture in her richly colored gown and hair.” I know my grandmother never coloured her hair, so I am not quite sure what they are talking about! However, the talk appears to have been successful.