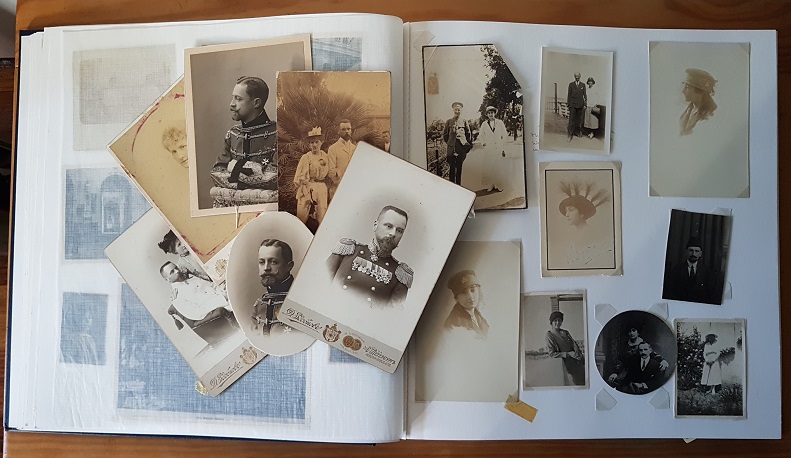 Six photograph albums and a tub full of loose photographs sit in the wardrobe of my spare room. Most of the photographs are from my maternal side of the family. There are so many of them, I am daunted by the thought of sorting through them. One of them is in the image above.

I have already disposed of most of the photographs of dogs. While clearing out my father’s house after his death, I filled two large green garbage bags with photos of dogs alone. My parents were fond of animals and my father had a particular affinity with German Shepherds. As soon as one died, he would replace it with the next. His last couple of dogs were mongrels, mixes of so many different breeds one hardly knew what to say they were. Now they, and their photos, are gone.

The photo albums still hold many photos of my parents travels around America. Vistas of black and white landscapes I have never seen. My mother posing in front of a view, my father in front of their car. Never the two in the same photo, as one of them was always behind the camera. Eventually those photos will also find their way into a garbage bag.

Then there are the unnamed, unplaced photos which might be of someone from our family or might not. The happy snaps of family groups around a picnic table, or at the beach or sitting on benches under trees, nestle next to the sternly posed photos which must have been the product of an official photographer. These are sepia coloured rather than black and white and are far more defined and focussed. Unfortunately, windows to the past they might be but the majority of them have no indication as to who is in them, or where they might have been taken.

I know that most of these unidentified images are from my maternal side of the family as they are interspersed with recognisable photos of my grandparents and great aunts and uncles. There are plenty of baby photos of my mother, who looks remarkably like me at the same age – or rather I look like her. There are photos of my grandparents, looking very young and sometimes happy, mostly in what I assume must be the French countryside. My assumption stems from the fact that my mother was born in Nice.

So many photographs and so little information. Quite the opposite from my paternal side of the family where I have plenty of family trees and indeed complete books about the family, but very few photographs.

I’m not sure which frustrates me more – trying to make up stories to fit the images or attempting to picture the people who are in the stories. I don’t really like either option. But at least I have something from each side of my family. There are people all over the world who have nothing of their ancestors, neither words nor images. They have to both make up the stories and imagine how their forebears looked. I am one of the lucky ones.

Fire: the incident which destroyed Count Kleinmichel’s estate in Potchep

Round and Round the Circular Family Tree