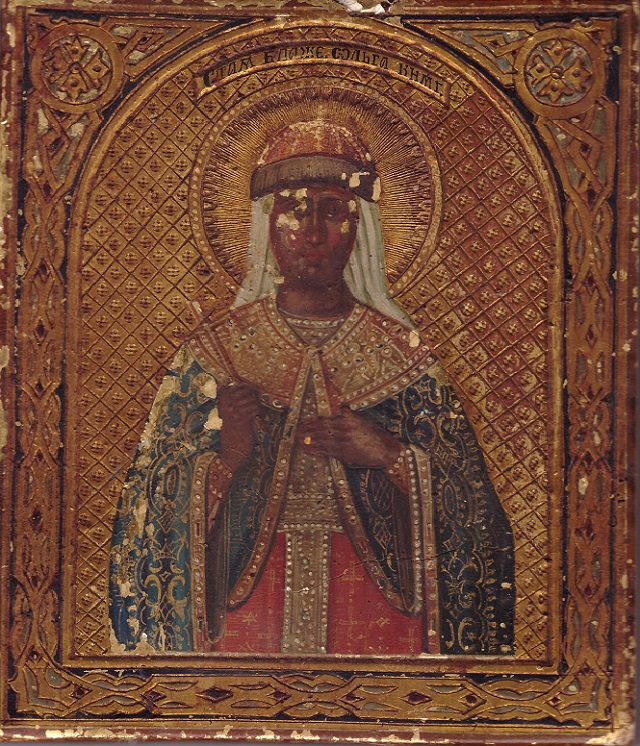 Do you ever associate one word or concept with someone in your family – either close relative or ancestor? When I think of my maternal grandmother – Olga Woronoff – the word which always springs to mind is religion.

My grandmother was very religious. Her day began, ended and was punctuated by prayer. My memories of her revolve around church services and worship. In her book, Upheaval, she recounted some of her first memories of the family church in Potchep:

From the earliest days of our childhood my brother, my sisters and I were taken to Mass every Sunday and I still have before my eyes a picture of that brightly dressed crowd of peasant men and women, crossing themselves devoutly in their slow and grave manner, while the air rang with the singing of the responses and the curling clouds of incense slowly rose and dissolved in the oblique rays of sunshine that fell from the tall windows.

I can still see Father Alexander, our priest, standing with the chalice in his emaciated hands and my father holding me in his arms while I received the Holy Communion. There was a serene gravity in his face at that moment and a solemnity that somehow conveyed itself to me.

I am happy that my parents, deeply religious themselves, brought us up in their ideas, instilling in us a profound and firm faith in God, for it proved as a rock to which we could cling through all the misfortunes and sorrows that befell us later.

The icon pictured above is of St Olga, my grandmother’s patron saint. Hanging from it, wrapped in plastic, is a note in my mother’s handwriting, which reads:

This icon always was in my mother’s room. The writing on the back is in English and, as far as I can make out, says the following: “Image of St Olga F… the 11/24 July. Presented by Her Majesty the Queen of Greece to Sarita Louise Zoë A… Rangabé when leaving for Russia 1/14 June 1905.” Below this is very faint writing which I cannot make out and a signature. Note: the dates given are from both the Julian and Gregorian calendars.

So who was Sarita Rangabé? A bit of Googling later led me to this page: http://www.hussards-photos.com/Grece/Grece_CDV_Rizo-Rangabe.htm where I discovered that one Sarita Louise Zoé Craig-Halle married Eugène Rizo-Rangabe, a cavalry officer in the Hellenic Army, on 5 October 1885. It seems to be the most likely explanation for who Sarita was. But it still leaves me wondering why my grandmother had her icon.

Was it given to her by a family member or friend? Did she buy it herself somewhere? Did she value the icon because it was of her patron saint, or because of the person it had once belonged to? It is highly unlikely I will ever know the answer to my questions, but that happens when you try to unravel stories from your family’s history!

From Countess to Teacher – she made a living teaching languages