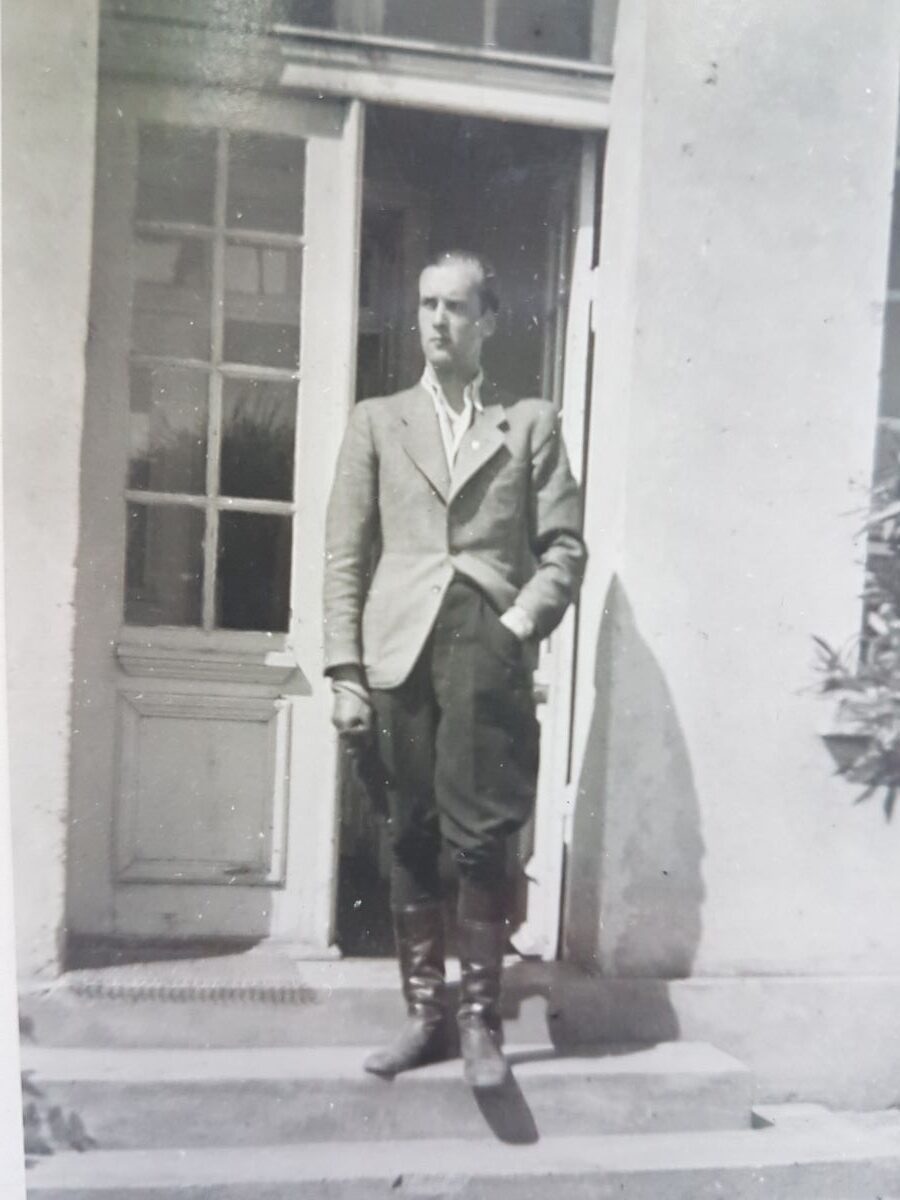 I am not sure which is more frustrating – old photographs which are not identified at all, or written on in any way, or old photographs which are not identified but have cryptic captions written on them. Especially when those captions are written in almost undecipherable handwriting! Even more especially when they are in another language!

Yes, I am continuing to plough my way through the many photographs I inherited. Some of them are just too difficult to identify where they were taken, when they were taken or who is in them. Those are put on the “to be thrown out” pile. Perhaps one day I will get around to disposing of them. But there are others, such as the ones below, which have no identification but have had obscure messages written on the back.

There is one very blurry photo of my father on horseback. I can recognise my father, despite the photo having been taken by an unsteady hand. On the back is a caption, handwritten in pencil and in German, of which I could only make out a few words. After consulting with a German friend, who could also not make out all the words, the caption reads something like, “P.. Baron from Zelaskow is coming to Jungingen …”.

The other photo shows a female who I cannot identify sitting in a horse drawn wagon. At least I think it is a female as the person appears to be wearing a skirt. The caption on the back reads, “Jungingen has a broken car again – Zelaskow has to help out.” It is possible the female is one of my aunts but I really have no idea as the photo is not very clear.

For awhile I thought the horse’s name could be Jungingen. But then I Googled and there is a German municipality south of Stuttgart called Jungingen – so I guess there is no name connection with the horse. I have previously written a blog post about my father, my grandfather and Zelaskow, which is an area in Poland. My grandfather was relocated there during the war, toward the end of 1941, along with many other Baltic German families at the time, who were displaced from the Baltic States and moved to Poland. There are approximately 970kms between Zelaskow and Jungingen. Is it feasible that my father and the unidentified female travelled from one to the other during a war?

My father’s notebook entries from 1942 to 1943 place him in Zelaskow at least four times but nowhere near Jungingen. My aunt – my father’s eldest sister – also wrote a journal but, as I have to translate it from German to English before I can read it, it is taking me a rather long time and I have yet to reach 1942.

I guess I am amongst one of the last generations who will have to worry about identifying old photos. With Facebook and Instagram, not to mention digital cameras and mobile phones, photos should be easier to label in the future.

Remembering Grand Duchess Olga on what would have been her birthday