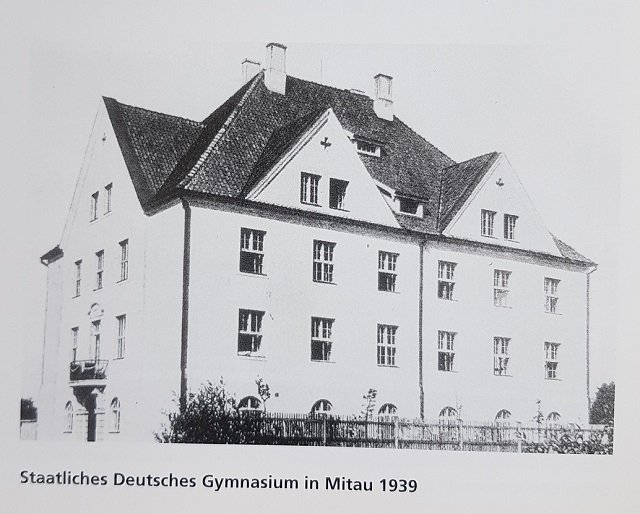 As the saying goes, school days are the best days  of our lives – or are they? I tend to think the days we spend in school are not memorable for the education we receive, but for the friendships we make and the lack of responsibility we have. It is when the weight of responsibility hits us that we look back with fondness on those years we spent at school.

Speaking of responsibility, last week I started spring cleaning – in winter. I had the sudden urge to pull everything off of shelves and out of drawers, sort, dust and reorder. In the midst of this activity I rediscovered a book I had bought at a Fircks family reunion several years ago. It is called Die Umsiedlung (The Resettlement) written by Claus von Aderkas and is, unfortunately for me, all in German. One of my cousins had been flicking through it and brought to my attention a photograph of my father. The photograph was taken during his final year at the German State High School in Jelgava (Mitau) pictured above. It was 1938 and he is standing at the far right in the photograph.

Taking another look at the photograph I have to wonder if it was professionally taken. Not all of the students are looking toward the camera, some are looking at the ground or at their classmates in front of them. Only some of them are smiling and the teacher looks very grim. My father is one of the few who is not only smiling but is also looking relaxed. The author of the book is in the same photo – I believe he is the one seated in the middle of the front row – he would have known my father.

I have written about my father’s time at high school before. But looking through this book prompted me to dig out his old student passes – the forerunner of our Student ID Cards. The first one I found is dated 1934, which was the year he would have turned 15. I find it hard to believe the photo on the pass was taken when he was a teenager, so I wonder why that particular photo was used?

The other student pass I have was his last school pass. He graduated high school in 1938, the year he turned 19. The photo on this pass is more believable.

If his school days were the best days of my father’s life, it would have to be because they were the most secure. Having been brought up for the first five or so years of his life moving from place to place, his family found some sort of stability when they moved back to Latvia to resettle in Mitau (now Jelgava). The family were by no means financially secure, but at least they were not relocating as often as they had been. My father and his siblings would have been able to make friends and do whatever teenagers did at the time.

Found Objects – The New York Times and the assassination of JFK