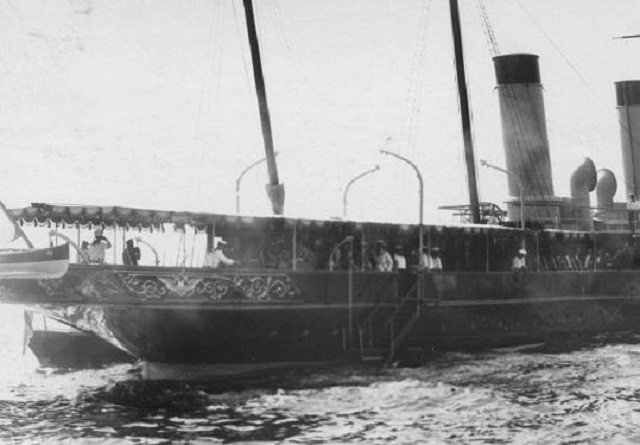 On 28 June 1914, the Austrian Archduke Franz Ferdinand was assassinated in Sarajevo. It was an incident which was to set a chain of events in motion, culminating in World War I.

Not quite a month after the assassination, around 20-23 July 1914, the French President, Raymond Poincaré, made an official visit to Russia where one can only assume the assassination and the threat of war were on the agenda. Poincaré, ever the statesmen, made certain during this visit to assure Russia of the support of France in the event of conflict.

Poincaré arrived by sea on board the France and was soon transferred to the Alexandria, where he was met by Tsar Nicholas II. On researching the France, I discovered she was a battleship and was still being completed when she made the journey to Russia, only finally reaching completion in the following month. The arrival of the French President was, by all accounts, a magnificent display with guns being fired, naval men cheering, both the Russian and French anthems being played and crowds gathering to watch the celebrations. And I found out that my grandfather was there, pretty much in the middle of it all.

“In July of that same year, 1914, President Poincaré came to Russia and my husband was appointed to accompany him, during his stay in our country, upon each of his trips on the sea.”

During the same month as the visit of the French President, St Petersburg was dealing with strikes and general unrest. A general strike had taken place in early July and the city was rocked with protests and rioters. According to my grandmother, this turmoil continued during the state visit:

“While the President of France was in Russia strikes unfortunately broke out in St Petersburg, which made a painful impression on everybody, and there were disorders.

Our carriage, going from the suburb of Peterhoff into St Petersburg to meet some friends of ours, was smashed to pieces by rioters; the horses were wounded and the coachman saved his life only by running. We were convinced, later, that these disorders had been fomented by propaganda paid for with ‘German money’, but nothing in the atmosphere at the time predicted to us that the horror of the war was so close at hand.”

Hindsight is a wonderful thing, but I do question whether my grandparents, among others, should not have paid a bit more attention to the chaos and disorder around them. Although I do not have much written evidence to go on, it appears that my grandmother at least was shocked but not necessarily alarmed. However, it would not be long before the situation would worsen.

The Right Time to Write