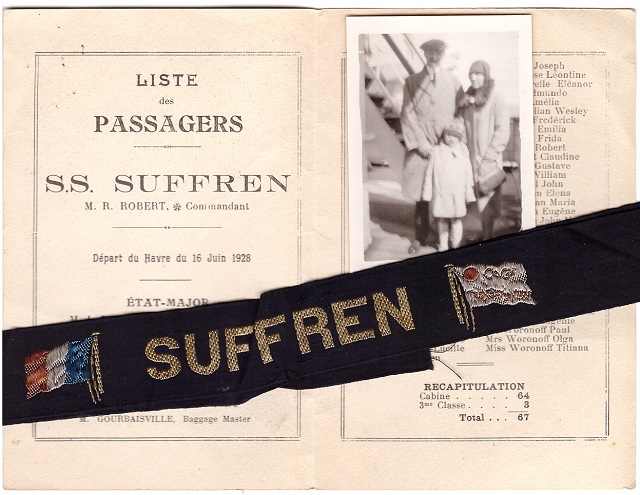 Fyodor Dostoevsky, the great Russian writer, wrote those words. I’m sure they were written from experience.

My grandparents, Paul and Olga Woronoff understood how important hope is to life. If they had not had hope they might not have survived through the tumultuous years that their homeland of Russia threw at them; with World War I, the Russian Revolution and the Russian Civil War. Even as they eventually fled Russia, leaving everything they owned and knew behind, they had hope that one day they could return. It was not to be.

Making their lives in France my grandparents lived constantly with hope. The hope they would find work, the hope they could rebuild their lives and, eventually, the hope and joy that the birth of their daughter, my mother, brought to them. But, after nearly eight years in France, and with a new and exciting hope in their hearts, my grandparents took a leap into the unknown and decided to start again in America – a land which, at that time, epitomised hope.

In my grandmother’s possessions was the draft of a manuscript she had written as a sequel to Upheaval. The working title was This – is America. In it she wrote:

“We had been urged to come to the United States by an American we had met in Paris and this man, whom we had talked to only a few times and who knew little about us, warmly urged us to leave Europe behind and build our lives afresh in the New World.”

And so, in June 1928, my grandparents and my mother boarded the SS Suffren from the port city of Le Havre, France and sailed to America with hope and dreams in their hearts. My grandmother records their first sighting of America in this way;

“In France a daughter was born to us and it was now with her, an excited, interested little onlooker, peering into the misty distance from the boat’s deck, that we saw first the Statue of Liberty, then the famous skyline of New York take form and substance.”

My grandparents were not to be disappointed with their new life. This is reflected in the words my grandmother wrote so many years ago;

“In the dreadful condition the world finds itself in today, we in America are fortunate enough to be able to lead a normal life, to bring up our children in the principles and traditions handed down to us through many generations, and to watch them enjoy all the advantages this country has to offer to its people.

These, however, are not reserved for Americans alone. All those who seek shelter and peace from the terrible cataclysms that shake other continents, can enjoy them too and find a warm welcome in this country.”

Up to that point history had not been gentle with my grandparents, but their hope had prevailed. I am sure my grandparents would have agreed with the Irish poet Seamus Heaney, who wrote; “Hope and history rhyme”.

Too Young. At twenty-two he was drafted, fought, killed and buried.

Did the issue of Commemorative Stamps foreshadow a gloomy future?