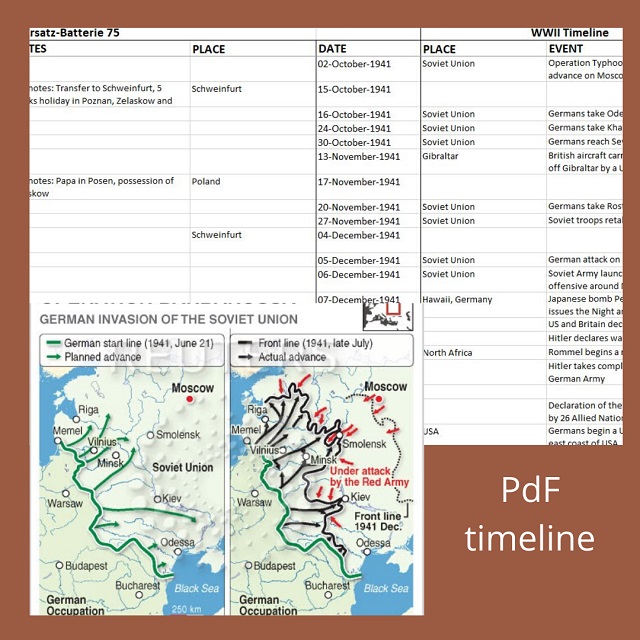 It has been a long and slow process, but I am finally able to trace some of my father’s footsteps through World War II. There are times when I have almost regretted starting this project, and times when I feel I should end it before I learn too much, but something inside me pushes me forward. I guess I understand that not everything I learn about my father’s time in the German Army, the Wehrmacht, will be pretty.

I can take comfort from the fact that my father was not in the SS nor, from what I can ascertain, was he a member of the Nazi Party. Not only had he been forced to become a German citizen after the Latvian War of Independence had displaced him, but he was then compulsorily drafted into the army. It was a turbulent time.

As mentioned in my previous post, I have discovered just how much assistance creating timelines can give me in my family history searches. They are invaluable, not only as a visual aid to trace your ancestor’s footsteps, but also to compare their footsteps to the world events at the time. This information was very useful, especially when plotting the events of the war against what I knew, or could assume, about my father’s whereabouts.

It took well over a year, but I managed to obtain the partial record of my father’s army history. Some of the records unfortunately have been lost or misplaced. However, I also have a small notebook of his where he had recorded his movements so succinctly they could almost be dot points. Some of his handwriting is difficult to read but I am gradually deciphering it.

I have found it helpful to look at maps detailing the movement of the German Army during WWII. The one in the picture above is from this site: https://sites.google.com/site/wwiito42project/home/operation-barbarossa and it is useful because of its clarity. Some of the other maps I have seen are far more detailed and therefore not so easy to read. During Operation Barbarossa, the Germany Army was split into three: Army Group North, Army Group Central and Army Group South. My father was in a division which was part of Army Group North. Naturally that is the one of which I have found the least information.

Thankfully, my father lasted no longer than five or so weeks in Operation Barbarossa before he was severely injured and airlifted back to Germany. It is not often that one would be grateful for an injury but, if he had continued to fight on the Eastern Front, I might not have been born. There were so many causalities, I am happy he was not one of them.

I am nearly finished creating his timeline against that of the historical events of the war. Once I have mapped out those years, I might expand the timeline to cover his entire life. After that… well… there are plenty more members of my family and therefore more timelines to create!

Melbourne’s public transport and me

Rule 1: You must leave the house