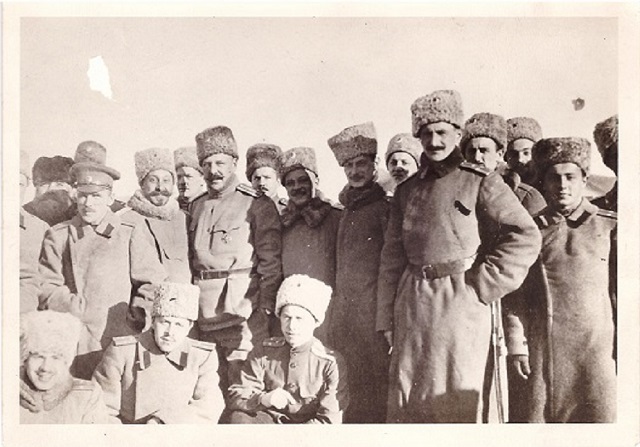 On this day, 102 years ago, my grandmother, Olga Woronoff, began a diary which documents their last months in Russia and their movements during the Civil War. My grandfather, Paul Woronoff, was fighting with the White Army (the Volunteer Army) and my grandmother had travelled to the south of Russia to be together with him – or as close to him as she could be. Last year I wrote about her Easter experience in Novorossiysk here.

This is her first entry:

4 (17) April 1919 Novorossiysk (having read further through the diary, I believe it was 4 April according to the old calendar)

Yesterday Pavlik went to Ekaterinodar (in 1920 Ekaterinodar was renamed Krasnodar). I’m anxiously waiting to hear from him. Our near future will be settled.

Today is the first sunny day after a long while, and quite hot. After waking up I saw a small spider on the wall and thought that it was a harbinger of some bad news. And so it was. Just before now officers came to requisition our room. They didn’t enter the room, and the landlady put them off for now by saying that it has already been requisitioned. But considering that there is no proof of that, I’m worried that they might evict me, “un de ces quatre matins.” (the phrase means “one of these four mornings”). I will try to press all buttons and stay But God willing, I will leave this place soon to join Pavlik.

Ekaterinodar at the time was where General Denikin had set up his headquarters. Ten days after this diary entry my grandmother records that she arrives in Ekaterinodar. This differs from her account in her book Upheaval, where she writes:

In the spring of 1919, Paul was ordered to Ekaterinodar again. Katia and I went with him only as far as Novorossiysk, and there we passed three months – alone again – living as economically as we could in the room we had found in a peasant’s house on the outskirts of town.

Spring in Russia officially begins on 1 March, so even if she had been in Novorossiysk since that date, she would have only stayed there for about six – eight weeks, taking into consideration both old and new calendars. Granted Upheaval was published in 1932 and, assuming my grandmother took at least a year to write it, her memory of the events in 1919 could have dimmed. Or perhaps she took some poetic licence with dates and time spans when writing.

So far I have been unable to find any photos from 1919 (I know they had to destroy many of their keepsakes before they left Russia, including letters and photographs) so the photo above was most probably taken in 1915 when my grandfather was fighting in World War I with a Combined Regiment. He is to the right in the photo with his hand on his hip.

Their History in Pictures – the Woronoffs in Le Canadel, France