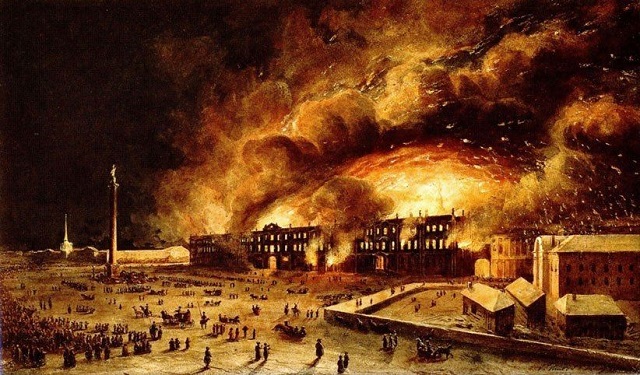 On 17 December 1837, the Winter Palace in St Petersburg, Russia, burst into flame. Almost as soon as the last embers ceased to burn, Tsar Nicholas I started to plan the rebuilding of this remarkable structure, hoping the new palace would wipe the memory of this disaster from the minds of his people. The Winter Palace had been designed by the architect Bartolomeo Rastrelli at the request of the Empress Elizabeth and took eight years, from 1754 – 1762, to be built. It was a three storey building, the largest and most impressive in St Petersburg.

The fire, lasting two days, had destroyed the interior of the Winter Palace. Apart from a few of the first floor rooms, only the exterior stone walls were left intact. Thirty guardsmen died in the fire. A couple of days after the last of the flames were extinguished, the Tsar appointed a Special Commission, which included my great great grandfather, Lieutenant General Pyotr Kleinmichel, to investigate the causes of the fire. They discovered that, when the Field Marshalls’ Hall and the Hall of Peter the Great had been fashioned from a series of smaller rooms several years before, a vent in a stovepipe had been overlooked and not bricked over. The heat from this vent had ignited and caused the surrounding woodwork to catch fire. The fire had then spread rapidly.

My great great grandfather (pictured above) was later appointed by the Tsar to lead the reconstruction of the Winter Palace. In her book, Upheaval, my grandmother records the incident in this way; “In 1837 the Winter Palace burned almost to the ground – and it was the Tsar’s wish to have it rebuilt within the year exactly to the last detail as it had been; am impossible task, it was supposed. Finding no one willing to undertake it, the Emperor appealed to my grandfather. Exactly a year later the Tsar moved into the perfectly restored Palace.”

In fact, although my great great grandfather was in charge of the actual implementation of the rebuild, he was one part of a committee which also included architects and people who had played a major role in the running of the Winter Palace. However, it has been noted that it was my great great grandfather’s administrative skill and determination which ensured the Tsar’s schedule was adhered to. Although he had a reputation of being a somewhat brutal man, he was apparently a good administrator, who was always ready to serve the Tsar to the best of his ability and without question. In 1842 he was made Minister of Transport of Imperial Russia and served in that position until 1855.

A Rounded Education; languages, humanities and the universe