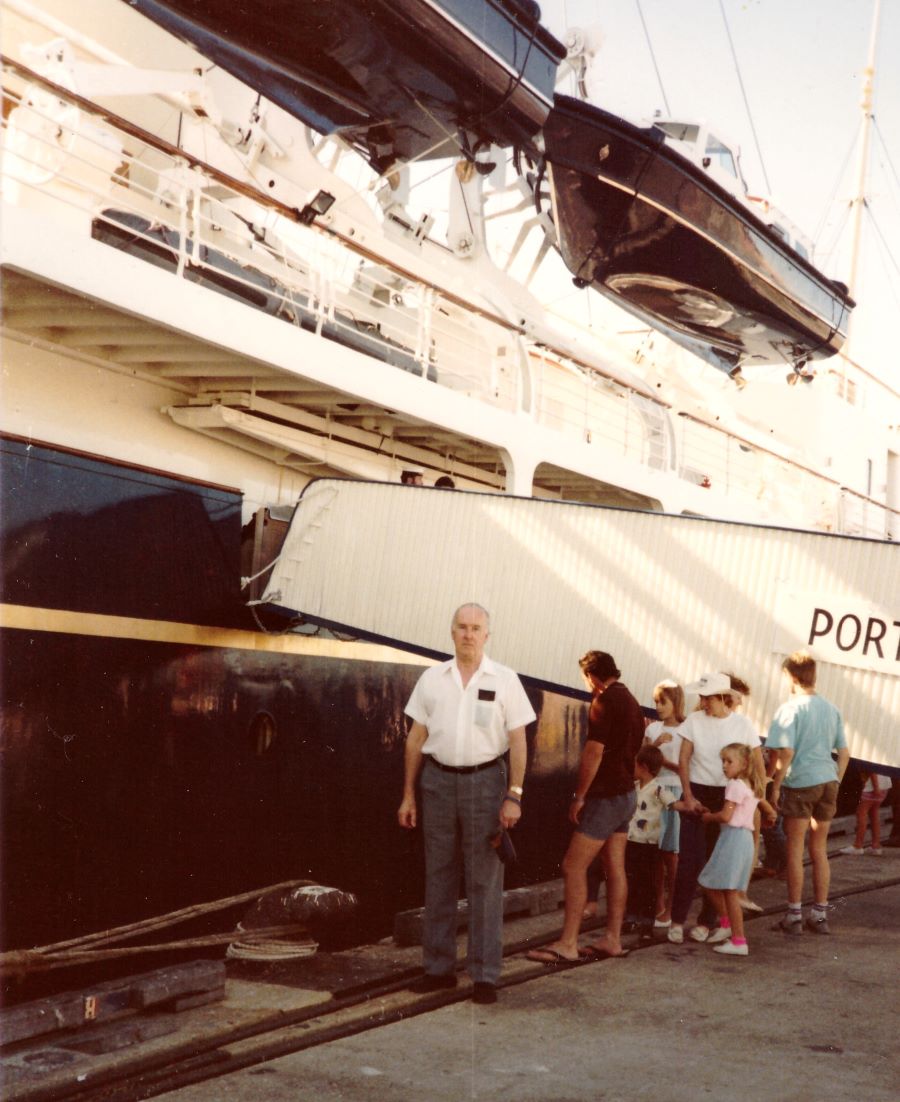 My father at the Port of Fremantle 1986

My father’s first voyage was from Cherbourg, France to New York, aboard the Queen Elizabeth. From what I gather, the journey took around 5 days. He must have enjoyed himself as I remember he would reminisce about the ship and his time on it, even years later. The Queen Elizabeth was part of the Cunard Line of ocean liners and for years ran between Southampton in the UK, via Cherbourg, to New York. So far I have not been able to find the passenger list which has his name on it.

Perhaps it was my father’s desire to rekindle those memories which led him to booking us on the P&O Orsova for our journey to Australia. We left from San Francisco and sailed to Sydney via Vancouver, Hawaii, Fiji and New Zealand. I cannot remember how long the voyage took – I imagine weeks rather than days – but I do remember having a wonderful time. Most days I would stand at the bow, my arms resting on the railings, just looking at the water below and enjoying the rise and fall of the ship as it ploughed through the waves. I especially liked it if the weather was a bit rough. Often my father would join me and we would stand there together, but alone with our thoughts.

Ships had some sort of magic for him. My father often went to the Port of Fremantle just to look at the ships. Now and again, when one of the American navy ships was in port, he would join the queue to go on board and look around, marvelling at the new technology. My father’s love of ships did not seem to stretch to a love of the ocean. From our first day in Australia until his death, I cannot remember him ever going to the beach to swim. Now and again we would walk to the beach and along the jetty but he never swam. I do, however, have a vague memory of him swimming during one of our holidays to a beach in New Jersey. I must have been about six or seven at the time.

I have no idea where my father got his passion for ships. He grew up mostly in land-locked areas. His first ever sea voyage was as a four year old, when his family returned from Germany to Latvia. They took a ferry from Szczecin, in what is now Poland, to Riga, Latvia. According to the journal my aunt wrote (my father’s eldest sister), she was the only one who was not sick and she had a lot of fun on the voyage. Even if my father was sick on that voyage, it certainly did not put him off his passion for ships.

He Protected His Family and Estates from the Ravages of War

A Generation Ago – Memories of St Nicholas and Time Spent Reading