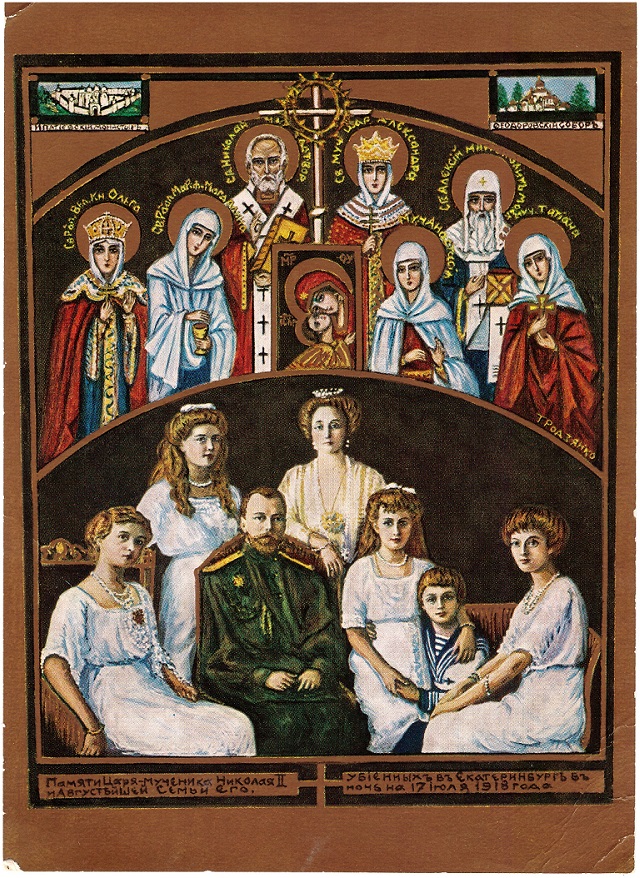 This weekend, the execution on 17 July 1918, of the last Tsar of Russia, his family and their faithful staff, will be commemorated by many. There will be posts on social media and, no doubt, articles in newspapers and services in the Russian Orthodox churches remembering this dark day in history. One of the most accurate depictions of the execution can be found here, on the “In the Steps of the Romanovs” YouTube channel. Warning – it is not for the faint hearted.

The postcard pictured above is one of the many postcards I inherited from my parents and grandparents. It was, I believe, designed to honour the last Russian Imperial Family and commemorate the day of their murder. The postcard is divided in two by a curved border with the Imperial Family portrayed underneath, making it look almost like they are in an underground room or cave. Above and curved around them are images of saints. My Russian (and my eyesight – even with a magnifying glass) is not good enough to make out all of the saint’s names, but there is definitely an Olga, Alexandra and Tatiana, so I am assuming the saints portrayed above the family are the patron saints which the Romanovs were named after. On the back of the postcard (in Russian) is written:

T. Rodzianko: The Royal Family and their Heavenly Patrons

Underneath, in Russian handwriting, is a short message which I cannot decipher. However, it looks very much like the signature could be that of T. Rodzianko, who I presume was the artist – not to be confused with the other Rodzianko who played a role in the abdication of Nicholas II. Strange. No amount of Googling has, as yet, informed me of who T. Rodzianko was.

My grandparents, Pavel and Olga Voronov (Paul and Olga Woronoff) knew the Imperial Family. My grandfather, as a Lieutenant on the Imperial yacht, The Standart, became quite close to the family, especially the young Tsarevitch. The three eldest Grand Duchesses corresponded with my grandmother, although she was particularly fond of Grand Duchess Tatiana. My grandparents were, together with many other Russian aristocrats and White Army soldiers, in southern Russia when the news filtered through about the execution of the Tsar. It was only much later they found out that the entire Imperial Family had been murdered.

I wrote about my grandmother’s memories of the sad event here.

She had strong opinions and no love for Tolstoy’s writing

Looking for a Unicorn