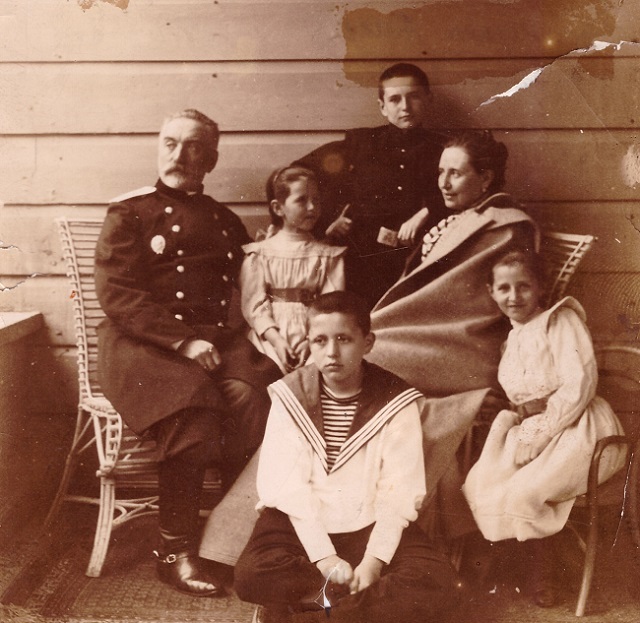 Major General Alexei Aleksandrovich Voronov was my maternal great-grandfather. I have written about him once before here. Since then I have discovered a bit more about him.

Alexei attended the Pavlovsk military school, graduating in around 1870 as a “Harness Junker”, which appears to have been a rank of senior cadet and, at the time, was a rank given to a non-commissioned officer who came from the nobility. The Pavlovsk military school was opened in 1863 in St Petersburg. It ran until November 1917. He went on to attend the Nikolaev Engineering Academy, where he studied the sciences.

As I mentioned in my previous post about Alexei, he was married twice. His second marriage was to his cousin, my great-grandmother, Anna Pavlovna Voronov. They had four children, the eldest of whom was my grandfather Pavel (Paul Woronoff) who I have written about here. In the photo above he is standing at the back. Three years later his brother Alexander was born, followed two years later by Anna and then four years after her came the youngest sibling Natalia. I have written the sad story of Natalia’s husband Boris here. The family is pictured above, my grandfather is standing at the back of the photo.

By the time Natalia was born Alexei was working at Tsarskoye Selo. I know that Natalia attended the Smolny Institute for Noble Maidens in 1910 and the family was then living in St Petersburg in Apartment 8, Building 1 on the embankment of the Moika Rivier. The apartment building was known as The Adamini House. In the summer the Voronovs lived on an estate called Novinsky Schar in the Ufa region of Russia. The Ufa region is over 1000kms east of Moscow in the Urals. I have no information about the estate. However, the history of the region looks interesting and has connections to both the Mongols and Ivan the Terrible!

Time, what we want most