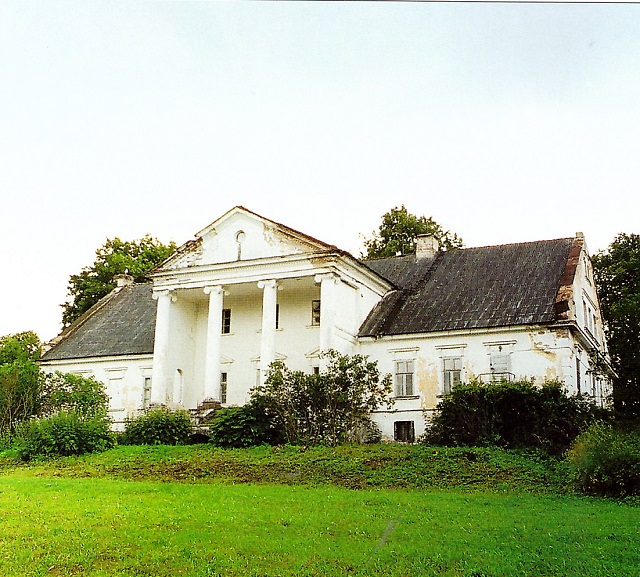 My paternal grandparents were born on neighbouring estates in the Talsu District of Latvia. As the crow flies there are approximately 8kms between Nurmhusen, my father’s family’s estate, and Dursupe where my grandmother Sophie Elisabeth Marie von Hohenastenberg-Wigandt, was born on 21 September 1881. I wish I had known that when I visited Nurmhusen.

According to the book Latvijas Pilis un Muižas (Castles and Manors of Latvia), Dursupe was built in 1820 and then reconstructed in the second half of the 19th century in a neo Gothic style. The photo above has been taken from this book. After an afternoon of Googling, I discovered several websites which mention Dursupe. This one details the history of the estate. Apparently the land was first parceled out in 1390 and went through a couple of owners. Then, in the 16th century, the land belonged to a Johann Altenbokumu. Interestingly a member of his family was the Governor of Tobago. Poor Johann was, according to the website, stabbed on a barrel of wine! There is no mention of a house on the estate in those early years, so I wonder where everyone lived before the manor was built.

Over the years the estate changed hands many times and the ownership becomes slightly confusing for me to follow – a situation not aided by Google translate. However it seems that Dursupe was bought in 1846 by my grandmother’s grandfather, Gustav von Hohenastenberg-Wigandt. Now, it looks as though Gustav sold Dursupe to his son Heinrich, my great grandfather, in 1873 for 80,000 rubles. The document I found in the New Kurlander Chronicles which details this, and subsequent real estate deals to do with the property, is in German and not easy to translate, but it seems as if there was some sort of credit owing on the estate.

According to my aunt, the eldest sister of my father, Heinrich enjoyed travelling much more than he enjoyed looking after his children, so, after the death of their mother, my grandmother and her siblings were brought up by their grandparents. In 1899, when my grandmother was 18, Heinrich sold Dursupe to Reginald Otto Woldemar von Boenninghausen-Budberg for 117,000 rubles. In hindsight Heinrich was smart to sell as apparently in 1919, during the Latvian War of Independence, the owners of Dursupe were murdered as a result of the uprising.

But, you ask, why is the manor haunted? Latvijas Pilis un Muižas (Castles and Manors of Latvia) tells us there is a round room in Dursupe where a Countess hung herself and it is out of this room ghosts often appear. I have attempted to trace this Countess but so far have been unable to discover who she was. It seems that official inspectors were sent to the manor to look into the ghostly hauntings. They discovered that, after eleven o’clock at night an unusual noise could be heard, lasting until one o’clock in the morning when everything went quiet again. The inspectors concluded that indeed something very strange was happening at Dursupe.

Where were the Voronovs in the 1920s? Finding their footsteps in exile

What happened to her fur coat?

The Tsar is buried… the Emperor is no more…