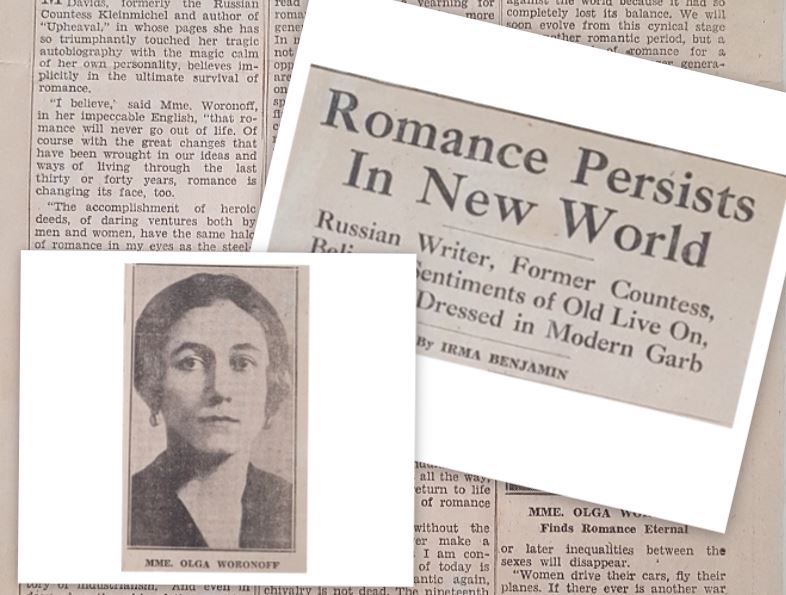 In 1932 my grandmother, Olga Woronoff, was interviewed about romance for The Public Ledger newspaper in Philadelphia. In the article she spoke about her views on romance in the modern age, as well heroism, elopement and the equality of the sexes. It certainly makes for interesting reading!

In her words, “So many people are apt to think of romance simply in the terms of love and courtship. It is everywhere in life to the imaginative person, in what looks like the most prosaic factory of industrialism. Even in the midst of the most terrific whirlwind of tragic experience, the sheer romance of living, of discovering new fields to conquer somehow perpetuates itself in that new living.” And on elopement, she comments, “What are all the elopements we read about, if not a yearning for romance?”

It makes me wonder – were there a plethora of elopements at the time?

She certainly knew enough about tragic experience. Together with my grandfather, Paul Woronoff, she lived through the darkest days of the Russian Revolution and Civil War, finally escaping to France where my mother was born. The years in France were tough. There was little work for my grandmother, who had been born a Countess and lived a life of privilege. But they managed.

On heroism she comments, “There are Joans of Arc today. Perhaps not so spectacularly heroic or self-sacrificing, but never-the-less courageous.”

My grandmother also knew all about romance and I am sure she saw many acts of heroism in her life. She dearly loved my grandfather and, when he died in 1969, she fell into a depression from which she never really recovered.

The newspaper article does present some of my grandmother’s seemingly conflicting views. On one hand she states, “Economic freedom without the love of a man will never make a woman happy.” Yet in the next paragraph she is quoted as saying, “The probability is that sooner or later inequalities between the sexes will disappear.” And she appears to link the emancipation of women to romance, “It seems to me that when emancipation of woman, her actual and recognized participation in every line of business and adventure will have reached its peak and become an every day event, the pendulum may swing the other way, not all the way, but enough to allow a return to life of some of the glamour of romance of the olden days.”

In what can be seen now as almost a prophesy, in the penultimate paragraph of the article, my grandmother muses, “Women drive their cars, fly their planes. If there ever is another war women may help transport the heaviest artillery or manipulate a cylinder that releases poison gases. She can die like a man. Her intellectual force is tending to equal man’s. She gains her livelihood in the same places as man.”

I wonder what my grandmother would think of women today and their continuing fight for equality?